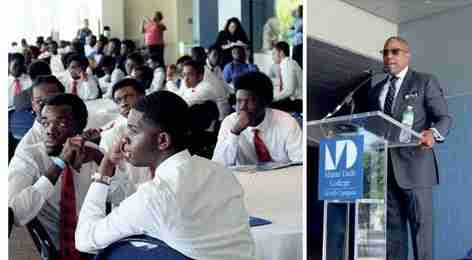 MIAMI – Although high school graduation rates in the U.S. are at an all-time high, one local institution of higher learning is taking steps to ensure that this nationwide trend is also achieved by students who have historically been left out.

Attendees participated in several breakout sessions led by local community leaders, mentors and academic staff that focused on teamwork, soft skills, networking and how to become a responsible member of society.

“It’s always great to be a part of something that promotes positivity among young black men and I’m excited about taking my future to the next level,” said Sharia. “I plan to study criminal justice, so I’m pretty sure that I’m going to have to study hard and learn how to network in order to get a good job and support myself.”

The annual symposium was spearheaded two years ago by MDC’s North Campus in an effort to help motivate and empower black males to pursue educational avenues beyond high school.

The initiative was also created to find ways in which local communities and education partners could work together to close educational achievement gaps and improve racial economic disparities.

“Studies show that many young black males face a wide range of economic, racial and social barriers even before they graduate high school, which results in some not reaching their full academic potential,” said Miami Dade College’s Dr. Kathy Maalouf, vice provost of student affairs. “In order to assist these students, we must continue to provide equitable services, such as scholastic support, financial scholarships and leadership development that encourage them to not only attend college, but to strive for success in both their professional and personal lives.”

According to statistical data provided by the school district, males who identify themselves as black or African American, make up 21 percent of the district’s high school student population. The graduation rate for these students was 70 percent for the 201516 school year, which is below the most recent national average of 83 percent for all high school students.

Dr. Steve Gallon – District 1 school board member for Miami-Dade County Public Schools – served as the keynote speaker for this year’s symposium. He stressed the importance of graduating from high school, saying it can become a “differentiator between reaching life goals or dealing with economic hardships later down the road.”

“As young black men, there will be times when doors are going to be closed in your face, causing you to become uninspired,” said Gallon during his keynote address. “No matter where you come from, having a quality education is the key to opening those doors, but it’s up to you to take advantage of every positive opportunity that is presented.”

Research has continued to suggest that individuals who attend college and obtain a degree end up making more money in the long run than those who don’t pursue a postsecondary education.

Data released by the Economic Policy Institute shows that college graduates on average earned 56 percent more than high school graduates in 2015 – up from 51 percent in 1999.

“There are so many great young guys from Miami, like myself, who have dreams of going to college and working in some extremely tough professions, including the medical field, banking, engineering and even information technology,” said 17-year-old Booker T. Washington High School student Cornelius Handfield. “My goal is to open up my own architecture firm, and I’m eager to take on any academic and life challenge that comes my way so that I can become the absolute best version of myself.”