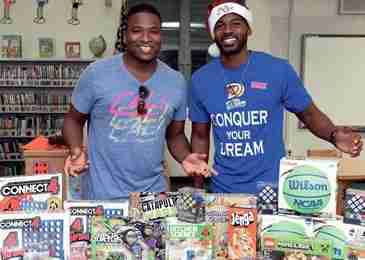 MIAMI – BMe Community wants to reward unsung Black Men’s genius in Miami. From now until February 21, black men who share their remarkable stories of creating opportunities for others will have a chance to become BMe Leaders.

The BMe Leader Awards come with national recognition, a $10,000 grant and travel to Washington, DC for induction into a life- long fellowship of peers. Though the BMe Leader Award began in 2012 overall, this is the second year the award will be given to men in South Florida.

Spikes overcame the violent death of one brother and the shooting of another, plus his own cancer diagnosis to show young people a way out of similar traumas. His “Let’s Talk It Out” conflict resolution curriculum has been adopted by Miami-Dade Public Schools, one of the largest and most diverse school districts in the U.S.

He is also a notable playwright whose production, “I Know Who I Am and It’s Not What You Call Me,” recently completed a successful run at the African Heritage Cultural Arts Center.

He said his experience as a BMe leader greatly expanded his network by introducing him to a brotherhood filled with men doing amazing work locally and nationally that he never even knew existed. He praised it affording him the ability to pick up the phone and call someone for encouragement. “BMe has provided a lot of access. It got me into doors that I didn’t even know existed,”

Spikes said. “Having access to a network of other great black men doing other wonderful things around the country opened doors beyond my wildest dreams, beyond my wildest imaginations. It helped me to see myself far greater than what I probably ever imagined myself to be.”

His sentiments were echoed by fellow leader Brandon Okpalobi, founder of DIBIA Dream and DIBIA Athletics, both which are committed to helping youth reach their highest potential through sports, academics, STEM and arts-based learning.

“It’s been a great experience,” Okpalobi said. “Being a part of BMe has really brought together people in Miami who probably wouldn’t have known each other. You can say it’s more of a brotherhood.”

Okpalobi said DIBIA was able to start its arts program with BMe funding as well as be introduced to other funders to expand its work in Miami and New Orleans.

“When we went to the national conference, it was great to see other people doing great work around the country, but going through the same struggles. It gave us someone we could reach out to, collaborate with and bounce ideas off,” Okpalobi said.

Pearson co-founded BlackTech Week with his wife Felecia Hatcher to increase the number of startup founders, technology executives and engineers of color. Both are venture-backed entrepreneurs.

Compared to other social innovation awards, the application process is short and easy with a few questions. BMe scores candidates on the remarkableness of their stories, authenticity, willingness to work with others, community engagement, and diversity of age and fields. BMe is especially DIBIA Founder Brandon Okpalobi speaks to a student during programming. interested in those who work to improve health, wealth, know-how and community.

Evans and Spikes don’t want men to be afraid to step out and apply.

“BMe is all about uplifting those stories we don’t hear about on the news which includes some profiles of leaders others dare not touch,” said Evans. “There’s so many black men in South Florida who are doing amazing things and we need to tap into those guys. Don’t be afraid of sharing with the world, what you do and why you do it.”

Evans said despite popular belief, black men are very active in their homes and communities. “When you think of the black male you don’t think patriotic, you don’t think fatherly. But the facts are out there. We just have to do a much better job of telling the story to one another and then letting that story grow out into the community,” Evans said.

“A lot of men don’t think they have what it takes to be a BMe leader, but they’re already doing the work on a major scale,” Spikes added. “They don’t get the press or the newspaper articles written about them, but they’re doing the work. They need to realize they are an asset to the community and apply.”

To nominate someone or apply, visit www.BMeCommunity.org.