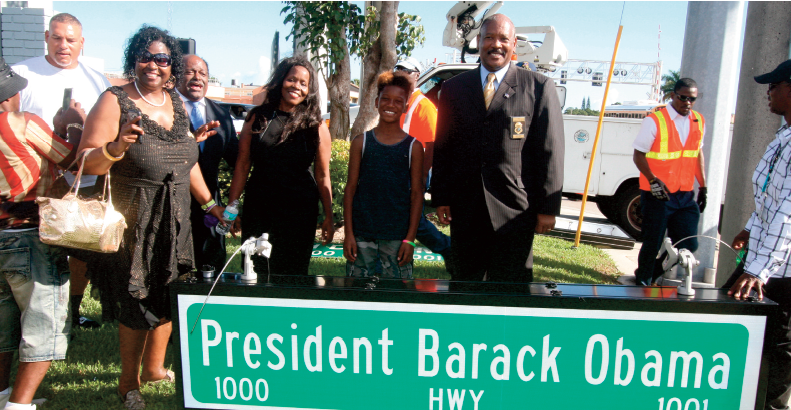 RIVIERA BEACH, Fla. – Riviera Beach mayor, Bishop Thomas Masters, never knew it would come to this. Several weeks ago, the city proclaimed a huge victory by changing the name of Old Dixie Highway to President Barack Obama Highway. And Masters said Riviera Beach is the only city in the nation where Dr. Martin Luther King Boulevard intersects with President Barack Obama Highway. Riviera Beach celebrated the street naming in grand style on December 17, 2015.
But there’s a dark side.
Ever since that day, the Mayor of the predominantly black city has since received constant threats, innuendo and warnings in emails and Facebook posts that harm could come his way as a result of his actions regarding the street change. “No, I never imagined this,” said Masters in a telephone interview on Tuesday. Even though there have been no direct threats to take his life, Masters said the indirect threats are vicious, hate-filled and graphic about the harm that could come to him as well as the president as a result of the street name change. “The mere fact that someone is wanting to become violent is cause for concern,” he said. “One of them even said they would put a rope around the president’s neck. They are nasty, horrible emails.”
Last August, when the city council voted to change the street name, some of the council members received hate mail. But it’s ramped up to a whole new level and got much worse, said Masters. “It started the day the signs went up,” he said.
Masters has notified the Secret Service about the threats because of the involvement of threats against President Obama. And he said the church he pastors, New Macedonia Baptist Church, is installing surveillance cameras.
It’s cause for alarm, but the popular mayor said he’s okay for now, and he takes comfort in believing that these are just threats and innuendo.
“Most people who really intend to do harm, actually do it. So far, nothing has come of it, so we’re okay for now. We’re monitoring the situation closely.”
Masters, a four-term mayor, was the brainchild of the street change. Last year, he collected over 2,000 signatures supporting his plans to change Old Dixie Highway to President Barack Obama Highway. The city council voted 4-1 in favor of it. The only white council member, Dawn Pardo, voted against it, saying the road was too blighted to name after the president. That was in August.
But just a few weeks ago, the city held a celebration on the corner of Old Dixie Highway and Blue Heron Boulevard, its main thoroughfare, to mark the occasion. Those in attendance sang songs of victory as the old signs were taken down and the new signs went up. Many felt it signaled a changing of the guard in the city, citing that “Old Dixie” Highway, represented hatred, divisiveness and evoked memories of slavery. Dora Mae Johnson, 88, said she witnessed firsthand a cross burning on Old Dixie in her younger days. The mayor presented her with the old signs to do “whatever she wanted to do,” with the Old Dixie signs.
The street also was once the dividing line in the city. Blacks were on the west side and whites were on the east side of the highway. Today, blacks live east of the former Old Dixie highway; but its far East side, known as Singer Island, is still predominantly white. Pardo, the lone white council person, represents Singer Island, in the city of just over 30,000.
Masters said changing the name was something he couldn’t shake.
“Something was very wrong with having a street named “Old Dixie” running through our city. It was something that just wouldn’t leave me.” On the day of the name change, he said it’s a new day in the city.
He said a package regarding the historic name change, including the South Florida Times articles, has been forwarded to the president. And despite the threats, Masters said he is pleased to have conquered such a great victory in the city.

Next post Memoir recalls MLK, family and the movement