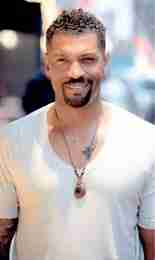 Comics hailing from the ‘Windy City’ have a long-standing tradition of leaving comedy club-goers laughing out loud while shaking their heads in disbelief at their unapologetic audacity.

Such iciness has shown up in the routines of the late King of Comedy Bernie Mac, Corey Holcomb, Adele Givens, Lil Rel Howery and DeRay Davis.

Fellow Chicagoan Deon Cole has helped to further define the Chicago expectation with his own amphibious imprint. Those acquainted with his work know his comedy is hilariously ‘Cole-blooded.’

Twenty years after making good on a friendly $50 bet he wouldn’t take the stage during an open mic night in his hometown of Chicago, the Emmy-nominated actor and tenured comic continues to maximize on the wager.

His penchant for ribbing exceeds race, class and caste. Cole acknowledges he is as comfortable in local comedy corners and back alley bars as he is on mainstage America.

He is a man of range, vacillating between work as a writer for Conan with Conan O’Brien, co-star of ABC’s hit sitcom “blackish” and Yara Shahidi’s coming-of-age spin-off, “grown- ish.” He’s also been tapped as co-host of BET’s upcoming comedy game show, “Face Value” produced by comedienne Wanda Sykes.

Cole has been running a long time but he hasn’t gotten tired yet. On Jul. 4, he returned to his roots serving as the premiere for Netflix’s half-hour special, “The Stand-Ups,” a comedy series in the vein of VH1’s “Comedy Central.”

He credits performing stand-up as his spring- board into acting, but not without a cost. His exclusion from a DefComedy Jam tour in the early stages of his career because he didn’t have enough material was actually a “blessing in disguise.”

“When I got kicked off Def Comedy Jam it was an eye- opening experience for me; it forced me to start writing,” Cole said.

A blow to his ego but not his dream, Cole insists that it was “necessary to be able to do what I do today and enjoy the successes from [that] experience. I learned it’s all about the writing,” he asserted, adding, “Failure is part of what we do as stand-ups. We have to embrace our failures … it is a part of the game.”

Cole embodies a fearlessness that pushes the boundaries of people’s senses and sensibilities, ideas and ideals. Societal constructs and personal musings are at the foundation of his brand of comedy.

“I like to make people think and laugh at the same time. I like to use real life in my comedy,” he said. It is a juxtaposition that he has mastered to a science, adding, “That’s where I draw my inspiration from.”

Cole prides his catalogue’s creativity as being as diverse as his audience. “Laughter is global,” he said. Getting people to laugh is his shtick.

“I really don’t have to engage my audience because they are engaged by my content,” he said.
Cole sees stand-up as an outlet for truths to be spoken; a cathartic escape from the axis on which his dizzying world spins.

Whether he’s broaching unchartered or controversial grounds, he notes there’s always a component of “truth” to his jokes.

Catch Cole in his element alongside Girl’s Trip breakout star, Tiffany Haddish, Sept. 2 at 7 and 10 p.m. at The Casino at Dania Beach, 301 East Dania Beach Blvd. in Dania Beach.

CONTACT: For more information or to purchase tickets, visit www.casinodaniabeach.com

Next post ‘Whose Streets’ doc changes the narrative on Ferguson