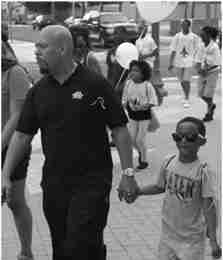 The community participates in “Walk A Mile With A Child.”

Per the 2013 CDC Health Disparities and Inequalities Report, there are many areas in which the disparities are very clear. For example, the report shows that “Cardiovascular disease is the leading cause of death in the United States.”

African American adults are at least 50% more likely to die of heart disease or stroke prematurely (i.e., before age 75 years) than their non-Hispanic white counterparts.

The prevalence of adult diabetes is higher among Hispanics, blacks, and those of other or mixed races than among Asians and whites. Prevalence is also higher among adults without college degrees and those with lower household incomes.

The infant mortality rate for blacks is more than double the rate for whites. Rates also vary geographically, with higher rates in the South and Midwest than in other parts of the country.”

The above exemplify many areas of health where disparities have been present for centuries.

In Miami, three very accomplished practitioners are involved in projects to help change the narrative. Doctors Nelson Adams, Cheryl Holder and Anthony Hall have come together over the past decade to support an annual initiative founded by Adams called the “Walk A Mile with A Child” community outreach program.

The initiative, which serves as a walk a thon and fundraiser at the same time, occurs in Historic Overtown, the hub for the history of Black Miami. This year it will occur on April 22 at Gibson Park, 401 NW 12 Street in Overtown. Registration begins at 8 a.m. and the walk starts at 8:30 a.m.

Held since 2008, the event has become a great opportunity to galvanize the community to improve health conditions and bring people outside of the community to form alliances with Overtown residents for the worthy cause.

Adams said it is also a wonderful opportunity for mentorship between parents and children, and/or guardians and children.

The initiative not only educates those in attendance about the health disparities among different groups in the United States and the ways to combat them, but also works to help families form habits that directly improve health care in a fun and entertaining way.

This year participants will be entertained by the Booker T. Washington High School band and their cheerleaders, who will lead the walk. There will also be a health fair with screenings, fitness demonstrations, discussions about nutrition, games and refreshments at Gibson Park where the walk ends.

Adams’ passion for teaching people about the importance of maintaining good health brings out the preacher in him during his presentations that include applying biblical principles. He is compassionate and supportive of events that help improve the health of communities.

“This walk is just one of those things that brings attention to the importance of attaining and maintaining our health,” Adams said. “An ounce of prevention is worth a pound of cure. If we can teach folk how to prevent problems, we are much better off than trying to wait until there is a problem. … Therefore ‘Walk A Mile With A Child’ is training children in the way that they should go and hopefully one day they won’t depart from it.”

Holder, noting the importance of the walk, is asking all adults to bring a child with them.

He said he sees Overtown “as a symbol of a thriving black community during the 30s and 40s that can rise again.”

“That’s sorta (sic) like how I see other people; despite everything with some simple changes we can thrive again,” Holder continued.

“We do this walk on the 22nd of April and we raise the funds to help support science experiments that we do throughout the community, for scholarships and to help different communities to increase their knowledge about health and to increase the number of kids interested in this. If we can make more doctors, we can make richer people for the community who will then share their money with the community,” Hall said.

To register and get involved with “Walk A Mile with A Child,” visit www.jwbms.org/aboutus/walk-a-mile/.