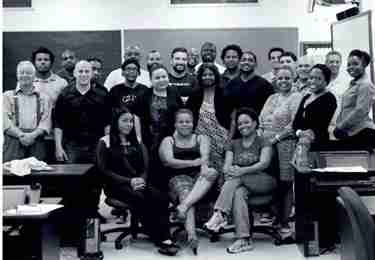 MIAMI – What started out as a vision in Pandwe Gibson’s head, has now become one of the fastest growing green businesses in South Florida. Over the course of two years, EcoTech Visions has been committed to making green the new black with three goals in mind – create jobs, sustain communities and save the planet. During that time, programming success for the incubator and makerspace included spearheading the formation of Miami’s first Green Corridor located along NW Seventh Avenue in North Dade. The initiative was made possible thanks to the leadership of Chairman Jean Monestime. EcoTech also grew 26 local eco-friendly businesses and launched the Digital Citizens Bootcamp with support by the Knight Foundation to train and employ residents from Liberty City with tech skills.

Gibson said she is proud of the success and progress being made to support entrepreneurs, create jobs and build a green economy.

“At EcoTech, we believe that the work we’re doing in our makerspace will eventually add to a more diversified economy in South Florida by creating product based businesses.” Gibson said. “I am proud to say that five out of EcoTech’s first fifteen companies broke $150,000 in revenues. We’re training and employing residents from Liberty City to become green collar workers in an effort to address systemic poverty and rebuild underserved communities.”

Now EcoTech is using the month of November to celebrate all of its successes.

Past and upcoming events include: On November 4 and 5, EcoTech’s Digital Citizens Bootcamp graduates put their skills to the test for an all-night Hackathon in conjunction with Miami-Dade Transit and the Miami-Dade Chamber of Commerce (MDCC). During the Hackathon, participants created websites and enhanced and optimized the online presence of Miami-Dade Chamber businesses and EcoTech entrepreneurs. A team of coders also beta tested the Miami-Dade Transit app, which would track the location of transit buses and their estimated arrival time.

EcoTech Visions created the Digital Citizens Bootcamp with support from Knight Foundation to close the gap and meet the need for in-demand tech skills with a free comprehensive eight-week intensive course teaching practical use of a wide range of web-based tools and applications necessary in the digital economy. As part of EcoTech’s mission to create jobs and sustain communities, classes were held in the heart of Liberty City at the D.A. Dorsey Technical Center to expand the opportunity to residents. Following last weeks’ Hackathon, EcoTech has now graduated 75 Digital Citizens Bootcamp students.

EcoTech is also celebrating sustainability efforts throughout South Florida with EcoFest on Thursday, November 17 from 12-6 p.m. at Broadway Place, located at NW 68th Street and NW 18th Avenue in Miami. The fest is a Give Miami Day community celebration in Liberty City to raise awareness for green efforts throughout the County, including how sea level rise will affect interior communities like Liberty City and Little Haiti. EcoFest features a Farmer’s Market with free produce giveaway, Junkanoo band and music, health and wellness screenings provided by the Jessie Trice Health Center and Empower You Family Health Clinic, live art, and a debut of EcoTech’s Ecopreneurs. EcoFest is free to the community and provides an opportunity for all communities to participate in the Give Miami Day festivities.

Culminating EcoTech’s two-year anniversary events is EcoFete: An Emerald Affair, a benefit to celebrate the organization’s sustainability initiatives and honor community members and organizations that have supported EcoTech. EcoFete is being held Saturday, November 19 from 6-10 p.m. at EcoTech Visions, 670 NW 113th Street in Miami. During the benefit, EcoTech will unveil the organization’s biggest initiative to date – the build out of EcoTech’s 22,000 square foot facility. This will be the region’s largest net zero building and Miami’s first green incubator and makerspace featuring co-working space, green rooftop venue, light manufacturing, a prototyping lab, an injection molding machine, vertical farm and a local food hub. EcoFete will be attended by business and community leaders and the environmentally conscious.

Tickets are available at EcoFete.eventbrite.com.