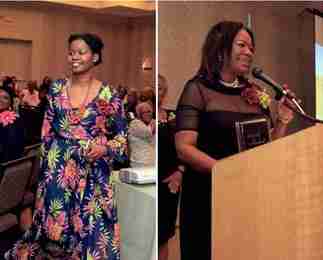 Broward County Commissioner Dale Holness and Urban League of Broward County President and CEO Germaine Smith-Baugh are just some of the civic and community leaders honored at this year’s Friends of the African-American Research Library and Cultural Center (AARLCC) Luncheon that occurred Saturday, October 8 at the Westin Cypress Creek Hotel in Fort Lauderdale.

Park, North Lauderdale, Lauderdale Lakes and the unincorporated communities of Roosevelt Gardens, Washington Park, Boulevard Gardens and Franklin Park. Holness is also active in many civic organizations including the Broward County Children’s Services Board; CareerSource Broward; and the NAACP.

Smith-Baugh leads the Urban League of Broward County in assisting Broward’s African American community to achieve social and economic equality. She also sits on the board of the Greater Fort Lauderdale Chamber of Commerce, ICABA South Florida Advisory Board and the Jim Moran Institute Advisory Committee.

Wright-Hines has served as a education- leader for more than 26 years with the School Board of Broward County, as a Teacher, Assistant Principal, Principal and Director. Currently, she is the Director of Title I, Migrant Education and Special Programs. She is responsible for the programmatic management of seven federal grants totaling more than $80 million.

The Heritage and Lifetime Achievement award recipient was George Burrows, Sr., founder and owner of Burrows Electric Company for 68 years, whose work toward economic and social improvement in the African American community has also garnered him the honor of being inducted into the City of Fort Lauderdale Walk of Fame. The winner of this award must be someone who has made a lasting and worthwhile contribution to the community for more than 25 years.

The Heritage and Distinguished Achievement recipients were Lorraine Mizell and Devarn Flowers. The winner of this award must be someone who was born and raised in Broward County. Their parents could have been early residents of the county as well. The honoree must be a graduate of a Broward County high school. Finally, the honoree should be noted for distinguished achievement in his or her career and /or community service.

Mizell continues her family’s legacy of community engagement and achievement in Broward County. Dr. Von D. Mizell, a member of the family, was the first black surgeon in Florida and co-founder of Provident Hospital, Fort Lauderdale’s first medical facility for blacks. Lorraine Mizell became a business entrepreneur who established convenience stores and a restaurant in the community. She also serves on the board of the L.A. Lee YMCA and the Negro Chamber of Commerce as well as a member of the Trailblazers of Broward County.

Flowers is a retired principal who spent 25 years working in various positions with the Broward County School System. Upon retirement in 2015, the Mayor of the City of Pembroke Pines declared July 17 as Devarn Flowers Day for distinguished service. Other recognition include one of South Florida’s 25 most influential and Prominent Black Women in Business and Leadership by Legacy Magazine in 2014.