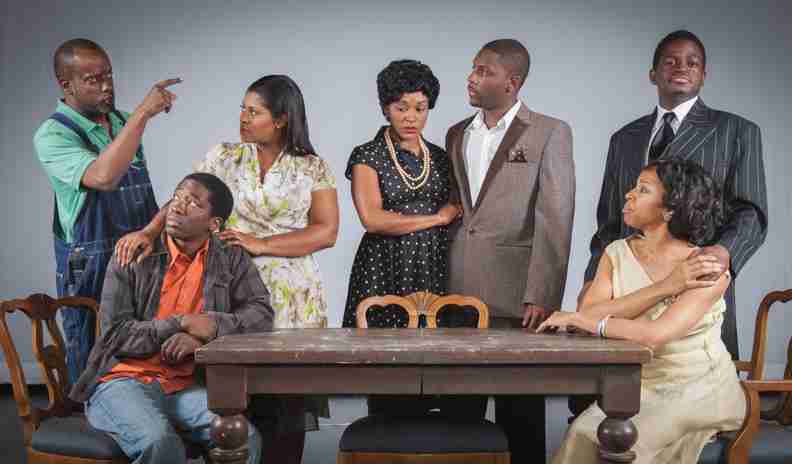 The M Ensemble Company opens its second production of the season with “Brothers of the Dust” by Kansas-bred playwright Darren Canady. The production will premiere at Sandrell Rivers Theater at Audrey M. Edmonson Transit Village, located at 6101 NW 7 Avenue in Miami.

The production, directed by Andre’ L. Gainey, runs from March 9-26 with show times at 8 p.m. Thursday through Saturday and 3 p.m. on Sundays.

Brothers of the Dust is a sizzling family drama about land, lust, money and inheritance in 1950s Arkansas. It was named best play at the 17th annual Black Theater Alliance/Ira Aldridge Awards at the Illinois Institute of Technology.

The time is 1958. The place is an Arkansas farm where Roy Colton, played by Keith Wade, the oldest of three brothers has worked tirelessly for years to keep the property viable while his two younger brothers (also on the deed to the land they inherited from their parents) have fled in favor of easier lives.

Colton is a stubborn, driven and volatile man and for years he has been unfaithful to his fervent wife, Mayetta played by Rita Joe. Now, Standard Oil is interested in paying for surveying rights to the land, which might be the site of hugely profitable gushers.

Devon Dassaw plays Wilson, Roy’s ruthless and desperate middle brother whose retail business in a larger town is facing bankruptcy, has come for a visit and a signature. His greedy wife, Nella, accompanies him.

At the same time, the brothers’ younger sibling, Ollie (played by Marquise Rogers) has also arrived. A much-heralded young poet in Chicago, Ollie is on the run because of a sexual indiscretion with a powerfully connected person. His socially and financially well-off “companion” Audra, played by Athena Lightburn, accompanies him.

Tickets are $30 for the Opening Night Cast Reception, which includes additional entertainment, food and beverages; $25 for general admission; and $20 seniors and students.

The theatre is handicap accessible, but please call in advance to make arrangements.

Tickets can be purchased online at www.themensemble.com and at the Sandrell Rivers Box Office. Call 305200-5043. For group discounts, call the M Ensemble Office at 786-773-3161 or email tgcooper@aol.com.