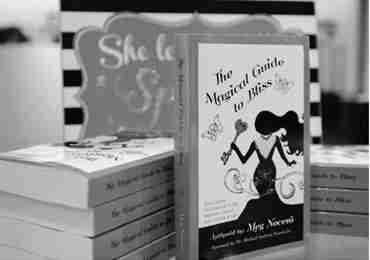 On the heels of publishing The Magical Guide to Bliss, Meg Nocero, the chair, invites people to claim their tiara, walk the red carpet, shine, embrace magical thinking and join the journey to bliss. The day will feature keynote speaker Janet Woods – a Reiki healer from Boston, MA, who will help you “Find your Inner Voice.”

The magic happens from 9 a.m. to 3 p.m. on Oct. 23, at the Rusty Pelican on Key Biscayne when S.H.I.N.E. Networking Inc., a Florida non-profit, presents the 2nd Annual S.H.I.N.E. Miami 2016, Journey to Bliss. Inspired by Oprah’s Live the Life You Want Event, Team S.H.I.N.E. brings Miami an amazing day of inspiration, networking, workshops, empowerment and so much more.

The event will also include testimonies and workshops from Lance Benson, a double amputee who is a corporate executive and motivational marathon competitor; Pilar Uribe, a successful actor of telenovelas and voiceovers who has survived breast cancer; Stephanie Shames, one of the highest rated fitness instructors in Miami; Hector Prado, an up and coming award winning pop artist and creative director of Firefly; the team of Andrea Askowitz and Allison Langer, a Knight Foundation award-winning creator of Lip Service, true stories reading series and co-producers of Writing Class Radio Podcast; Ana Gloria Rivas- Vasquez, life coach and development director of an international humanitarian aid organization; and Simone Gers, a Quantum Shaman who is a published author and international speaker.

In addition, S.H.I.N.E. Networking, Inc. fundraises to provide educational scholarships to support young innovative leaders in the community whose ideas make a difference for the world as a whole. This year, the S.H.I.N.E. Ambassador Award and Scholarship will be presented to Anna Patricios and Carlos Talavera.

Anna, who will be speaking, is an honor student and a senior in the Drama Magnet at Coral Reef Senior High School who put on a benefit in April called The Rainbow Connection to raise money and awareness of the rising problem of LGBTQ homeless teens in Miami. Carlos, who will be performing, is also a senior at Coral Reef Senior High School who worked on the choreography with Anna that made The Rainbow Connection a success.

Tickets are available on Eventbrite and at www.megnocero.com until Oct. 16.

Next post Village Square Series kicks off with community conversation