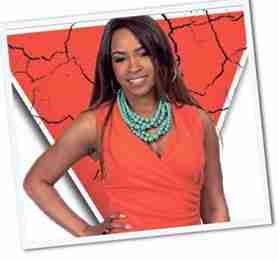 Na’sha sings on stage while playing Mercedes in the stage play “You’re Never Alone” in 2013.

FT. LAUDERDALE, Fla. – Na’sha is a vocal powerhouse with an extensive musical background who uses her talent to bring glory to the Lord.

The gifted songstress started singing in the church choir when she was only 5-years-old and got a record deal with Pure Records/Sony Red right out of high school.

Born Natasha (pronounced Nay-tasha) Watkins, Na’sha has been a Ft. Lauderdale resident for 15 years. Originally a secular artist, Na’sha moved to Florida from Columbus, Ohio to be closer to Pure Records’ headquarters, which was based in South Florida.

While under contract with Pure, Na’sha released an album called “My Story,” which she said did well in Europe. However, after about five years, Na’sha decided to get out of her contract and become an independent artist.

“I found out there were a lot of people in our pockets and we weren’t really making any money,” Na’sha said. “I saw loop holes in the contract so I hired a lawyer to get me out of the contract.”

She continued to sing secular music for five more years, working with artists like Shaggy, Ne-Yo, Ginuwine and more.

But after a decade of touring, she said she
could no longer ignore the Lord’s voice calling her to sing gospel.

“I got called onto the Lord’s stage. He said you need to stop doing this or you’re going to spiritually die,” Na’sha said.

She made it clear that she doesn’t think all secular music is bad – and still enjoys certain songs with good messages.

“If I had to song at a wedding, I might sing ‘I Will Always Love You.’ Celine Dion, for example, I like her. She’s awesome. But the type of music I was into, most of it wasn’t edifying and was for temporal gratification,” Na’sha said.

While she still had to fulfill certain contractual obligations, Na’sha began singing at her church, The Faith Center, eight years ago. Now she works regularly with renowned gospel singer Jonathan Nelson and is working on an EP that will be worship-based.

Na’sha said her musical influences come from home, having a mother and aunt who are identical twins that sang all the time and a great aunt who sang opera.

“My mom was my first inspiration,” Na’sha said.

While there are people who Na’sha said still thinks she may one day return to the music she once sang, she said it’s not going to happen because she is determined to live her life for a higher purpose.

“I’ve been saved since I was 19. Everybody has their little prodigal son and prodigal daughter walk. I always believed in the Lord, not have a full understanding of the Na’sha said. “Even though I’ve been gospel at The Faith Center for eight yea are people in the secular industry that still think that this is just a phase. But Jesus is real in my life and I’m not going back,” Na’sha said.

Next post Ways to deal with the death of a spouse