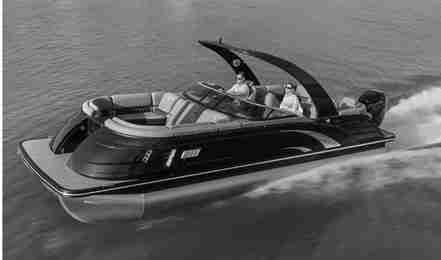 JUPITER, Fla. – Pontoon boats – those flatdecked vessels used for everything from dancing to fishing to water sliding into the Intracoastal Waterway – are becoming more popular.

“Pontoons fit more passengers than regular boats. They are affordable for more people. They are more comfortable. They have more shade. They sip gas,” said Bret Beach, owner of Beach Water Sports, a company that rents the vessels along the Intracoastal Waterway just north of the Palm Beach County line.

Once thought of as floating lawn chairs, pontoon boats are growing in versatility and popularity. Some have bars. Minikitchens. Bathrooms. Televisions. They pull water-skiers.

“The type of boats is constantly shifting. It depends on the price of gas. What type of fishing is popular. How well the economy is doing,” said Chuck Collins, executive director of the Marine Industries Association of Palm Beach County.

A decade or so ago, pontoon boats were the ugly duckling of the boating industry.

No more, according to the National Marine Manufacturers Association.

Pontoon boats led the recreational marine industry out of the Great Recession and the worst boating sales slump in decades. Sales have been growing steadily. Pontoons now represent about one-third of sales of new boats, according to the National Marine Manufacturers Association.

American builders sold a total of 49,829 pontoon boats during the 2016 calendar year. That’s almost a 10 percent increase over the number of pontoon boats sold during 2015. And in 2015, there was an increase of about nine percent from the previous year, according to the NMMA.

Price is one reason. A new 26-foot pontoon boat costs about $25,000. A new single-engine outboard 26-foot motor boat with a center console the same length would start at about three times that much.

Comfort is another reason. Pontoons are easier to get in and out of from a dock. There’s more room for coolers and other boat stuff. There’s more seating for passengers than a v-shaped boat the same size.

Usually about 22-28 feet long, they rely on two inflatable aluminum pontoons to float. Much of the flat surface is covered by a canopy. They usually have engines that can go about 25 miles per hour.

Then there are boats with three pontoons. They are called – what else? – tritoons. The engines are a little larger. They are more stable than twin pontoons. The tradeoff is tritoons are not as maneuverable as twin pontoon boats. They require larger trailers. And larger docks.

And there are big pontoon boats, like the 50-foot Manatee Queen that brings up to about 45 passengers for sightseeing tours on the Intracoastal Waterway off Jupiter.

Then there are party pontoons, such as the Pontiki, docked on the Jupiter River just south of Guanabanas restaurant. Advertised as a “floating tiki bar,” the 28foot pontoon boat has a refrigerator, wet bar, grill, television and stereo. Beer and wine are available. Up to six passengers pay $30 each per hour.

Docking his 26-foot pontoon boat at the public boat ramp at Harbourside Place on a recent afternoon, Jimmy Haywood said price was the main reason he bought his twin pontoon boat.

Haywood, 36, a traffic engineer from Port Salerno, fits up to a dozen people comfortably. They can bring fishing rods, towels, snorkels, fins, coolers and other stuff.

More stability means less people get seasick. He uses way less gas than his pals with V-shaped boats, he said.

“I’m less worried about the little ones falling overboard,” he said, tapping the thigh-high side rails that surround the inside of the craft.

There are disadvantages. Pontoons don’t go as fast as motorboats. Their turn radius is not as tight. In other words, they don’t handle as well.

They are not safe on rough waters. They are not recommended to be taken out into the Jupiter Inlet or the Atlantic Ocean. That means no dolphin fishing or offshore hunting for lobster.

But fishing is popular on pontoon boats in the Intracoastal Waterway and inland lakes, not only in Florida but other states from Minnesota to Maine. Many pontoon boats come equipped with fishing rod holders, fish-finder mounts, small anchors and other fishing gear.

Many say fishing on a pontoon boat is more productive.

A pontoon boat is stable so it doesn’t spook fish as does a rocking V-hulled boat. And the flat surface gives fishermen more room to move around.

Pontoon boat drafts may be as shallow as eight inches, far less than a motor boat. That reduces risk of running aground and potential hull damage while fishing or stopping at a sand bar.

“Pontoon boats are great for a family or group going out for a few hours on the Intracoastal Waterway or on a lake. I’ve been renting boats for 30 years. I see more pontoons now than ever,” said Beach.

Pontoon boats are a Minnesota invention.

Ambrose Weeres in 1951 wanted to make a sturdy pleasure craft more stable than a conventional fishing boat in Richmond, Minn., in Stearns County in the state of 10,000 lakes.

Weeres set a wooden platform on top of two rows of watertight steel barrels. He welded the barrels together end to end. Weeres tested his first boat on Horseshoe Lake in Stearns County.

It floated. His craft was steady. Weeres took 40 orders in 1952 for his boats. He displayed the boat at a show in Chicago. In the years to come, tens of thousands of Weeres pontoons would be made in Minnesota and sold throughout the nation.

Previous post I bought my home in 2017 – Where is my Homestead Exemption?