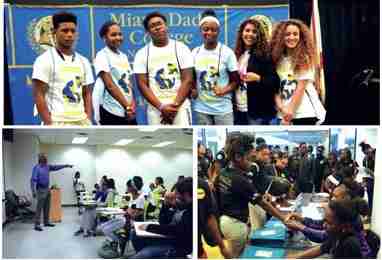 MIAMI – For the fourth year, Miami Dade College North Campus has graciously opened its blue and grey doors to partner with Urgent, Inc. to host the annual Youth Economic Development Conference. This year the tradition will continue July 11-12 at the college located at 11380 NW 27 Avenue in Miami.

This event allows youth ages 14-21 a free interactive and educational experience thanks to the college, The Children’s Trust, Southeast Overtown Park West Community Redevelopment Agency and many other benefactors.

The conference will open each day featuring the highly anticipated Youth 4 Social Change Film Festival. The festival premieres shorts from youth filmmakers from around the country, and a winning short will be selected at the end of the conference. There will be workshops, youth-led expos and master classes from film and television industry professionals.

The balance of the conference will focus on Arts, Coding and Technology, Entrepreneurship, Hospitality and Tourism, and Journalism, all industries in line with Miami Dade County’s One Community, One Goal.

Miami Dade College North will also offer student-led campus tours, credited Certification Courses in Technology and Film, and an introduction to MDC’s curriculum in the areas of Sciences and Forensics.

Other conference/expo highlights include the Youth Town Hall Meeting focused on education and employment, an entrepreneurship panel featuring CEO’s under the age of 20, youth-led arts and entrepreneurship expos, and breakout sessions.

The conference is a winning opportunity for youth, literally.

“Last year’s conference was awesome. We presented our radio talk show with Ms. Jill Tracey,” said 18-year old Deondre Marshall, “And I designed the t-shirts selected for the conference. It was the t-shirt with the globe as puzzle pieces and it read, ‘Shaping the World/Putting the Pieces Together.’ I thought, youth have the power to change the world, so how about we build it.”

The art competition will select and feature youth artwork at the Youth Mart where young inventors and merchants sell their wares. Additionally, young inventors and entrepreneurs can pitch their ideas at the Urban Philanthropies Business Pitch Competition and the winners will receive start-up funds and equipment.

The keynote speaker for the first day is ‘carpreneur’ and mechanical expert Lowell Gelin who will speak to a conference room full of youth about the keys to success in a 20minute speech.

Gelin is the CEO and Automotive Diagnostic Specialist of On Call Mechanics in Davie, Florida. He is committed to premiere service and developing young people in the community.

“I mentor incarcerated youth on a weekly basis. We’ve trained and employed young people who want to get experience in the mechanic and automotive industry. So when asked if I would share my passion with young people at this conference for the second year, the answer was a resounding yes,” said Gelin who was a workshop facilitator in 2016.

Moziah Bridges of Moz Bows is a 15-year old CEO and the keynote speaker on Day Two. He began his career as a bow tie designer at the age of nine. He was introduced to the craft by his grandmother who gave him the materials, taught him how to sew and encouraged him to be creative.

Bridges credits her with giving his wardrobe “a major upgrade.” That creativity has led him to a contract designing ties and bow ties for ball players in the National Basketball Association (NBA). He and his mother, Tramica, will share the opportunities and challenges families endure when embarking on the pursuit of a young entrepreneur’s dreams.

A host of guests, partners and friends are expected to make an appearance including elected officials, corporate executives and community leaders.

Urgent Inc.’s vice president Saliha Nelson recognizes the contribution of the many people involved to make this conference happen each year.

“We want this year’s event to be a high energy, educational event, so much so, the 500 youth leaders and largest audience we’ve ever had will walk away and be able to use the tools learned at YEDC2017 to impact and transform communities throughout MiamiDade County.”

Teens, parents, groups and volunteers can visit www.urgentincconference.com to register.