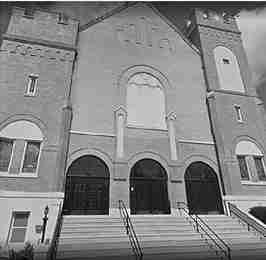 In a unique approach, the city’s Community Redevelopment Agency (CRA) is considering a new program that will save several of the city’s historic churches. The effort will allow the CRA to purchase Transfer Development Rights (TDRs). The funding will help the churches make needed repairs, or in one case funding to ensure improvements won’t ruin the buildings’ historic character.

TDRs are “air rights.” If, for example, a three story church is sitting on a property that the building code allows for a five story building, then the church owns the “air rights” or TDRs for two additional stories. The unused TDRs can either be used by the church to add two floors, or they can be sold to another property which can use the credits to build two more floors than the code permits.

TDRs have value and are traded on the open market like stocks. If a property has TDRs but no plans to build a taller structure, that owner can sell their TDRs to another property owner who can use them to construct a larger building on their property. The CRA is considering buying the TDRs from three churches – Tabernacle Missionary Baptist, St. Patrick’s Episcopal and Payne Chapel AME.

The money paid to the churches will be used to preserve their buildings. In one case the money would be used to repair and preserve historic stained glass windows. In another case it would be used to ensure the construction of an elevator will not destroy the historic exterior of the building.

The CRA can take the TDRs off the market, or it can decide to sell them to another property owner in the future. The program is still in the planning stages.

Next post 2000 children receive book bags in time for school