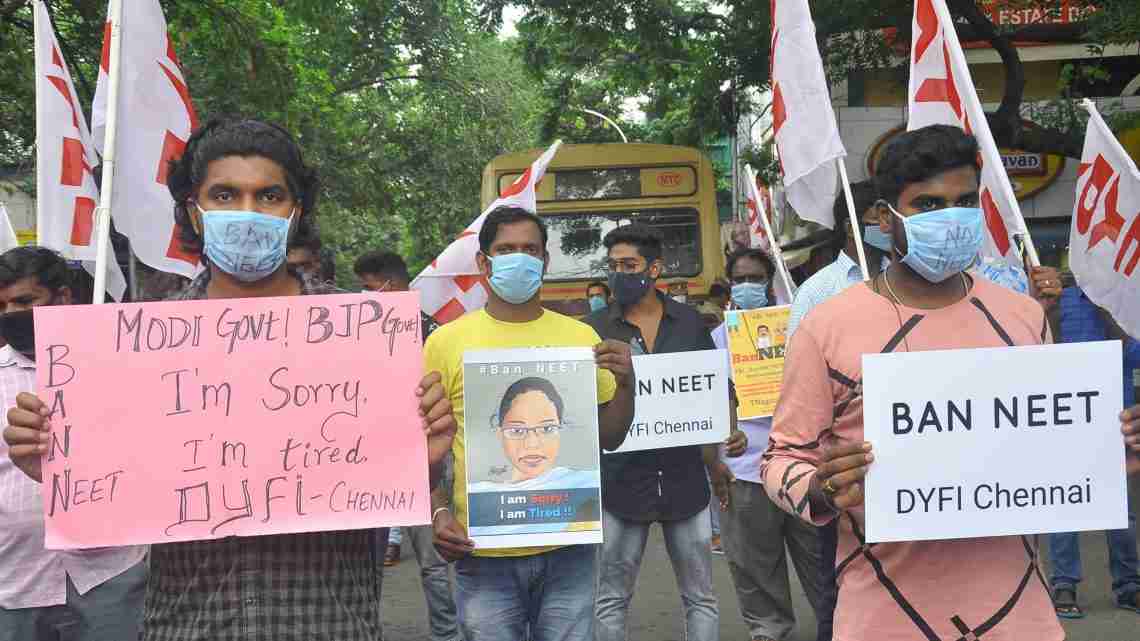 Aspiring medical students in India, particularly those coming from the state-run educational boards, are in limbo after the government’s adoption of a National Education Policy that includes a common entrance exam for students applying to undergraduate and postgraduate courses across disciplines.

Students and the various state-run educational boards say the syllabi and courses taught by the state boards are not adequate to prepare for the NEET.

There is widespread opposition to the NEET, particularly in the states of Gujarat, West Bengal and Tamil Nadu. Massive protests in Tamil Nadu included student suicides.

The students and state-run educational boards were just learning of the changes to NEET when the government decided on a completely new national-level examination. There is no clarity yet on details of the new common exam.

Dr. K. Senthil, president of the Tamil Nadu Medical Council and the Tamil Nadu Government Doctors Association, said students across different boards could face problems initially, as details of the course are not known.

“The students should be made aware of what topics will be a part of the exam. The first few years will be tough for them,” Senthil said.

The National Testing Agency, established by the government in 2017 to conduct entrance examinations for higher education institutions, will conduct two examinations: A common aptitude test and specialized subject tests in humanities, sciences, languages, arts and vocational subjects. The exams will be conducted twice a year.

Senthil said because of immediate implementation of the NEET for undergraduate courses, it has taken time for the states and their students to rework their syllabus to align with the one drafted by the National Centre for Educational Research and Training and the Central Board of Secondary Education.

“It took the students three years to get used to the NEET pattern and would have taken another few years to get comfortable with it. But the government again brought a change with the National Education Policy,” he said.

Under the national-level examination, colleges will be able to see the scores of each candidate and the subjects they have chosen. The idea is to facilitate admissions through a “one nation, one exam” process.

Anil Swarup, former secretary for school education in the Ministry of Human Resources Development, said the common entrance exam called for in the National Education Policy is for the better.

“If a student does not have the skills to become a doctor, he or she will have to take a step back and think of what they can do. Unfortunately, the problem gets compounded on account of the politics behind it.”

Swarup is not in favor of a uniform course structure across the country.

“Given the diversity of the country, the syllabus has to have local content, especially in humanities. For subjects such as physics, chemistry, etc., the states have to follow the standard syllabus so the students from each state can compete in the NEET,” he said.

He said if the states have a problem with the syllabus, they should rework it and not expect the exam standards to be changed.

Another problem when it comes to national-level examinations is accessibility to quality education. Most of the state-run educational boards are unable to equip students with the knowledge to pass such examinations. Therefore, students must enroll in expensive private coaching institutes in order to gain the necessary education.

Vivek Kumar, a student from the Bihar state board, said what he studied in school was not enough for him to sit the NEET.

“I had to attend private coaching classes to give the exam. I am going to reappear for the exam to get a better score,” said Kumar. This year was his second attempt.

Hrushikesh Senpathy, director of the National Centre for Educational Research and Training, said the fundamental problem is not the course structure but the learning outcomes.

“Everyone focuses on the exams. Rote learning is the trend seen in all the states,” Senapathy said. “After we revised the curriculum between 2007 and 2009, we conducted research. The classroom approach has not changed.”

The National Centre for Educational Research and Training is working on learning outcomes for students in classes 11 and 12, and Senapathy believes these outcomes will help the students sit the competitive examinations.

“Our focus has to change from content-mastery to competency-mastery. That will be the focus once we define the new outcomes,” he said.

Recently, T.R. Baalu a member of parliament from the Dravida Munnetra Kazhagam party — the opposition party in Tamil Nadu — raised the issue in the Lok Sabha, the lower house of parliament. He said the students who pass from the Tamil Nadu Board face problems in the NEET since the exam is based on the syllabus of the Central Board of Secondary Education.

Next post How Did the Bat Cross the Train Tracks? Germany Built a $1.8 Million Bridge