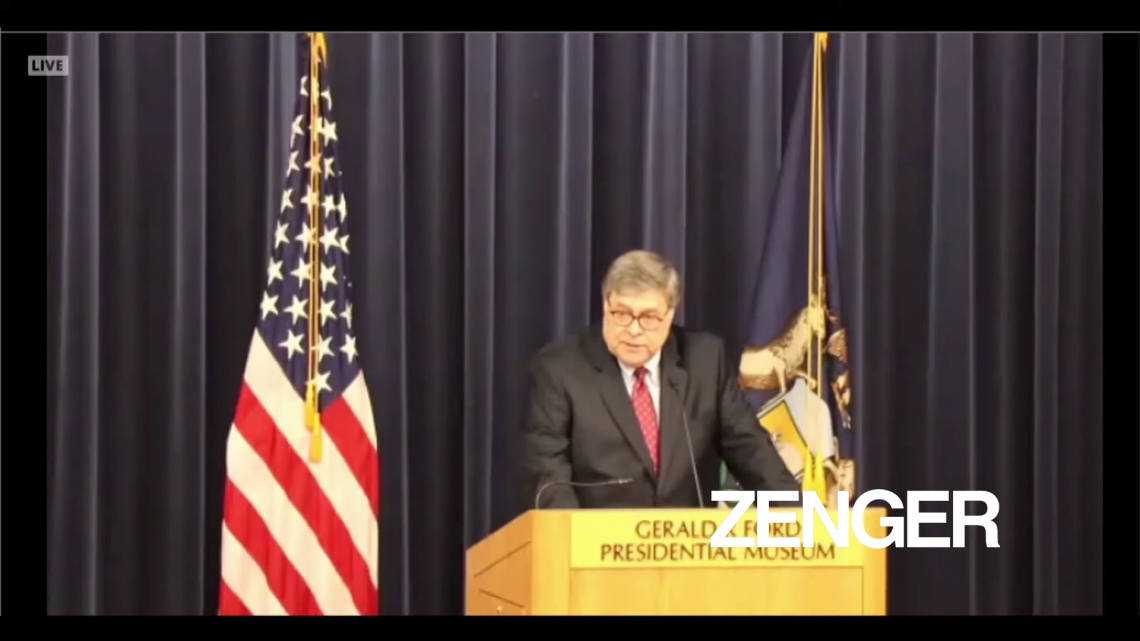 Barr, who testified Tuesday to the Democratic-led House Judiciary Committee, acknowledged that black Americans’ concerns about police “are legitimate” but said it’s “an oversimplification to treat the problem as rooted in some deep-seated racism generally infecting our police departments.”

“The leading cause of death for young black males is homicide. Every year approximately 7,500 black Americans are victims of homicide, and the vast majority of them — around 90 percent — are killed by other blacks, mainly by gunfire. Each of those lives matter,” he said in his opening statement.

“Although the death of George Floyd — an unarmed black man — at the hands of the police was a shocking event, the fact is that such events are fortunately quite rare. According to statistics compiled by the Washington Post, the number of unarmed black men killed by police so far this year is 8. The number of unarmed white men killed by police over the same time period is 11. Some unarmed suspects, moreover, were physically attacking officers or threatening others at the time they were shot. And the overall number of police shootings has been decreasing. Nevertheless, every instance of excessive force is unacceptable and must be addressed, as is happening now in Minneapolis,” he said.

A Washington Post database of police shootings shows there have been 488 police shootings in the U.S. so far in 2020. Of those, at least 23 people have been unarmed — 11 whites, 8 blacks, 3 Hispanics and 1 person of Asian decent. People who have died at the hands of police, but were not shot, such as Floyd, are not included in the database.

Both deaths set off protests, some of which have turned violent, against police brutality and racial injustice.

Although more people who have been shot and killed by police in 2020 are white, black Americans are shot at a disproportionate rate. The U.S. population is 13 percent black and 76 percent white, according to U.S. Census data.

“I don’t agree that that there’s systemic racism in police departments, generally, in the country,” Barr told Rep. Sheila Jackson Lee of Texas, in response to her question about whether the Justice Department sought to end what she described as systemic racism in law enforcement and institutional racism.

Jackson Lee was one of several black Democrats on the committee who questioned Barr’s assessment of systemic racism in police departments. It was the first opportunity Congress has had in more than a year to question Barr, who last testified on Capitol Hill in May 2019 to answer questions about special counsel Robert Mueller’s Russia investigation.

“I would hope that the DOJ would focus on systemic institutional racism because there is good policing. … That’s what we need you to join us on, Mr. Attorney General and to recognize that institutional racism does exist and until we accept that we will not finish our job,” Jackson Lee said.

“The laws were made equal. They are certainly not applied equally,” she said. “We do have systemic problems in our law enforcement system, our criminal justice system on every level.”

Rep. Cedric Richmond of Louisiana said Barr lacking any people of color among the senior staff members he brought with him to the hearing is a form of systematic racism.

“When you all came here and brought your top staff, you brought no black people. That, sir, is systematic racism,” Richmond said.

“I would just suggest, that actions speak louder than words,” he said. “You really should keep the name of the Honorable John Lewis out of the Department of Justice’s mouth.”

Lewis, a civil rights leader and Democratic congressman from Georgia, died July 17 from pancreatic cancer. Barr said at the beginning of the hearing that he wanted to pay his respects on behalf of the U.S. Department of Justice.

Next post News readership slips from its pandemic peak