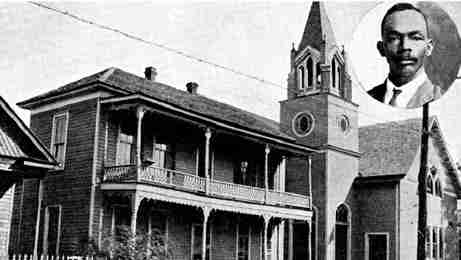 BEAUMONT, Texas (AP) – From its beginnings in the years after the Civil War, Beaumont’s oldest black church has witnessed the establishment of the area’s first black public school, weathered desegregation and this year will celebrate 150 years as a “beacon of light in the community.”

“Born and raised” in St. Paul African Methodist Episcopal Church, Walter McCloney said he strives to keep his “commitment (to the church) palatable.”

The Beaumont Enterprise reports the 79year-old church trustee said St. Paul A.M.E Church is a part of the legacy and vision of the “spiritual builders” who founded the church in 1868.

“We’re the beneficiaries of what they did,” said McCloney, pointing to the vaulted ceiling and colorful glass windows that adorn the Waverly Street sanctuary.

McCloney, the third generation in his family to attend the church, said St. Paul was “very special” to him as one of the oldest black churches in Beaumont.

St. Paul African Methodist Episcopal Church grew out of a Methodist church organized for blacks three years after the end of the Civil War, according to historical church documents. Members of the young church met on alternative Sundays in the basement of the Jefferson County Courthouse.

A Beaumonter since “the close of the War between the States,” church founder and former slave Woodson Pipkin was known for his “quaint old timey ways and self-respecting habits,” according to church documents.

Pipkin formally became the group’s first pastor in 1872 and moved the church to the second story of his residence once located in the 900 block of Market Street.

The church soon outgrew the upper story of Pipkin’s home and moved to a larger location on Beaumont’s north side at the site of what is now Alice Keith Park.

On Sundays, the church doubled as a school where many church members learned to read and write, according to an account by local historian Judith Linsley.

Pipkin later donated a lot on Wall Street that was the “center of activities for blacks,” witnessing countless births, deaths, weddings and civic ceremonies.

St. Paul remained at the downtown location until the early 1960s, when the old building began to give way to “age and decay,”

according to church records.

When the upper story of the church’s structure caved in, church members made do and held services in the basement. But when a fire destroyed the two-story building, the congregation raised funds to purchase the Waverly Street property.

St. Paul “stands on their shoulders” of longtime church members who have “kept the faith,” McCloney said.

In the 1940s and 1950s, St. Paul’s was one of the largest black churches in Beaumont, McCloney said, recalling the days at the downtown location when he and his friends would run to Fowler’s Drug Store after Sunday school to get ice cream before the sermon.

While McCloney said he believed all churches that preached a “positive message” during the civil rights era were a part of the movement, St. Paul’s played an active role in the community in the 1960s as a meeting spot for activists and NAACP members.

Alice Jefferson Tiller, whose family were longtime members of St. Paul, was one of the first African-Americans to enroll at Lamar University in 1956, according to McCloney.

While its membership has slowly dwindled, McCloney said he looks forward to reaching out to families and communities to become a part of the church’s legacy.

“This is our family,” said Bobbie Williams, who joined the church in the 1980s after moving here from Louisiana.

Williams said she joined St. Paul after feeling “so at ease” in the church.

Years ago, women weren’t seen in church without hats or gloves, Williams recalled, adding that St. Paul’s “down-to-earth” and no-frills atmosphere made her feel welcome.

Williams used to sit in the same pew as the late Fayetta Donovan, one of Pipkin’s descendants, who Williams said was “a lot of fun.”

Whenever the preacher would “preach too long,” Donovan would begin to shake her keys to signal the end of the hour.

“Ms. Donovan always said, if they preach too long, the people will lose their spirit,” Williams said.

Church founders and organizers “kept the faith for so long,” McCloney said. He is proud to be a part of the tight-knit congregation and “a lifelong member of that legacy.”

Next post Reflections on powerful legacy of Kofi Annan