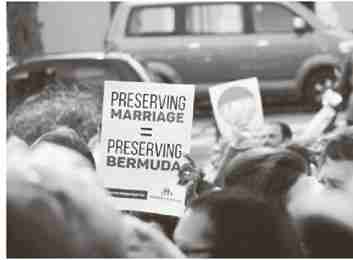 HAMILTON, Bermuda – A strong majority of voters in Bermuda have opposed same sex marriage in a non-binding referendum in the British island territory.

“This has been and will continue to be a highly sensitive matter”’ he said. “Despite our differences we must progress forward. And my hope is that as we move forward as a country, we move ahead with greater tolerance, understanding and respect and appreciation for one another.” Dunkley’s government scheduled the non- binding referendum after it considered legalizing same-sex marriage in May 2015 amid strong opposition in the Atlantic Ocean island territory. Officials held several public meetings ahead of the referendum that Dunkley said were aimed at educating the public and fostering discussion.

Shadow Home Affairs Minister Walter Roban urged everyone to respect the referendum’s results. “We must unite and come together and heal our divisions,” he said in a statement. “There was much energy expended on this issue by both sides.”

Next post Diet Pepsi with aspartame returning to shelves in US