Biden: Racism in US is institutional, ‘white man’s problem’ visited on blacks 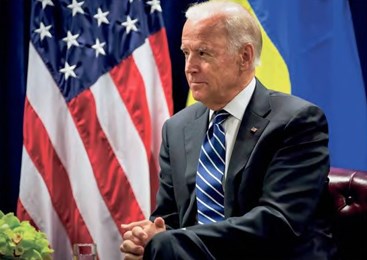 WASHINGTON (AP) — Racism in America is institutional and it is a “white man’s problem visited on people of color,” Vice President Joe Biden said Tuesday, arguing that the way to attack the issue is to defeat President Donald Trump and shame the racists he has emboldened.

Taking aim at incendiary racial appeals by Trump, Biden said in an interview with a small group of reporters that a president’s words can “appeal to the worst damn instincts of human nature,” just as they can move markets or take a nation into war.

Biden is leading his Democratic challengers for the presidential nomination in almost all polls, largely because of the support of black voters who have formed the foundation of his advantage. He has made appealing to black voters central to his candidacy and vowed to make maximizing

black and Latino turnout an “overwhelming focus” of his effort. The interview focused largely on racial issues.

The former vice president attributed his support among black voters to the fact that he has a long record of working in their communities — something, he said without being specific, that several of his opponents have not done.

He added that while he would “preferably” select a woman or person or color as his running mate, he is ultimately looking for someone who is “simpatico with what I stand for and what I want to get done.” He said he will not make a commitment on whom he would choose until he is comfortable that they agree on major issues and how to address them.

Biden said that President Barack Obama gave him “presidential authority, for real,” and “never second-guessed me” and added that he would do the same.

Next post Book Tries to Show How US Democracy Hurt Native Americans.