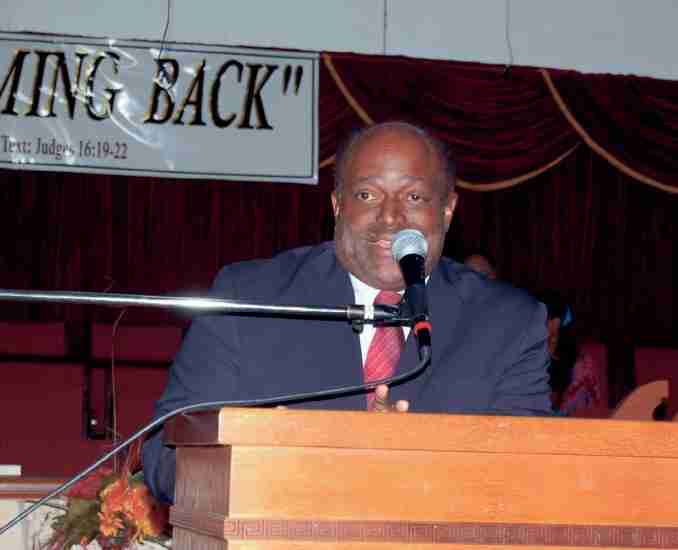 Riviera Beach, Fla. – Bishop Thomas Masters, founder and pastor of New Macedonia Baptist Church in Riviera Beach and former mayor of the predominantly Black city, sees the Black Lives Matter mantra as more than a cultural movement, but rather akin to a biblical principle. That is why Masters’ is becoming the first church in Palm Beach County and possibly in the state to erect a Black Lives Matter mural in the church parking lot.

There are murals in church parking lots in Tulsa, Okla. and Phoenix, Ariz. But this would be the first in Florida and the first nationwide to erect the names of martyred history makers on parking space curbstones.

The names of Dr. Martin Luther King Jr., Medgar Evers, George Floyd, Breonna Taylor, Corey Jones and more, are etched on red curbstones at the church with red signifying the blood shed in their deaths. Above the curbstones is a mural bearing “Thou Shall Not Kill.”

The mural will be unveiled Oct. 18, the day before early voting starts in the state and the day which marks the fifth anniversary of the tragic killing of church drummer Jones, who was shot and killed by an officer as he awaited arrival of a tow truck off I-95 in Palm Beach Gardens.

Many high-profile families of murdered victims and others will be on hand to mark the occasion. They include Sheila Banks, Corey Jones’ aunt; Tracy Martin, father of Trayvon Martin; Wanda CooperJones, mother of Ahmaud Arbery;

The parking lot mural is the vision of Bishop Masters, who served as mayor of Riviera Beach for 12 years. He is currently international ambassador for the World Conference of Mayors. He is also responsible for renaming a key city thoroughfare from “Old Dixie Highway” to “President Barack Obama Highway.” The Black Lives Matter mural will be one block away from “Martin Luther King Boulevard” and one block from “President Barack Obama Highway” – an interesting irony.

Masters says in this effort, he wanted to pay homage to the past and present and to also acknowledge the biblical connection to the Black Lives Matter mantra.

“This is a vision I had and wanted to make it a reality at the church. The vision was to make the connection between the social statement and the biblical principle, Exodus 20:13, Thou Shall Not Kill, in The Ten Commandments. We are seeing that Blacks are being killed just because they are black. Black Lives Matter is not new. Medgar Evers, Dr. King, Malcolm, were all killed because they were black. It goes back through our history. This is a history lesson,” he pointed out.

Another organizer, Riviera Beach Councilman Douglas Lawson, says it’s all only worthwhile if the people vote. He has organized a caravan that will ride through the streets of Riviera Beach immediately following the ceremony urging residents to go to the polls the following day when early voting starts.

“We have to push the narrative that Black Lives Matter and that the urgency to vote is critical,” stated Lawson. “This is the most important election of all time. We have to sound the alarm to get the people to vote!” The unveiling and events will take place Sunday, Oct. 18 at 1:30 p.m. at New Macedonia Baptist Church, 748 W. 9th St., Riviera Beach.

Next post LeBron James does it again, his way