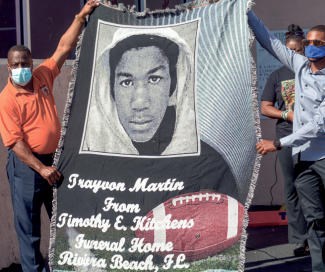 RIVIERA BEACH, Fla. – There’s a pandemic. We all know that and yes, it has our attention- practically all of it. But there’s one person focused on an issue that just can’t wait until “after" the pandemic. That’s saving black lives.

Sybrina Fulton, the zestful and relentless mother of slain teen Trayvon Martin says the Black Lives Matter movement can’t afford to take a break until the pandemic ends. Speaking recently at a ceremony in which a parking stoop now bears her son’s name at a Riviera Beach church, Fulton told the press the ﬁght must go on whether there’s a pandemic or not.

“Despite COVID, Black Lives Matter isn’t going away. We want people to pay attention to our lives, too. They have children’s rights, women’s rights, animal rights….but we need to care about HUMAN RIGHTS,” she touted outside the New Macedonia Missionary Baptist Church, where a BLM mural had been painted, along with parking stops bearing names of others slain during the movement.

Trayvon’s name was joined by others such as Corey Jones, Tamir Rice, Dr. Martin Luther King, Malcolm X and more in the one-of-a-kind Black Lives Matter parking zone, the brainchild of the church’s pastor, Bishop Thomas Masters. Masters was also longtime mayor of predominantly Black Riviera Beach and now serves as International Ambassador for the World Conference of Mayors. He has spearheaded other BLM murals in the city.

Fulton, who traveled to the church with staff members, continued making her perspective known. “It’s important that we stay woke! We’re not going anywhere so we might as well get along with one another.” Fulton said before the TV cameras. She said she doesn’t understand the strong hatred of black people. “It’s important that people not hate so much.” She said the BLM movement is a positive force that should be respected and embraced.

Trayvon Martin’s murder at the hands of security guard George Zimmerman initially sparked the BLM movement, dubbing his mom as Mother of the Movement. Over the past decade a plethora of highproﬁle murders have sparked the anguish and outrage of people of color all across the nation. But the gruesome death of George Floyd last summer was thought to be the turning point in America because of the horriﬁc nature of his demise.

But it wasn’t at all a change of heart. Since then, there have been other blacks murdered at the hands of ofﬁcers causing many African Americans to wonder if the callous and senseless murders will ever end. This week a black high school Florida teenage girl was slammed to the ground and handcuffed by a sheriff deputy. She suffered head injuries and is now being represented by civil rights attorney Benjamin Crump. Black boys and girls, male and female are weekly being savagely beaten or murdered at the hands of police. There appears to be no end.

Fulton said Blacks are being struck down merely because of their race. “Why do we kill people because of their skin color?” she asked, seemingly still baffled years after her son’s murder. “The BLM movement is something positive,” she said.

But despite the by and large rejection of the Movement by whites, Fulton remains hopeful when asked about police reform possibilities under the new administration. “I am hopeful and I think we have a brighter future with the Biden-Harris administration. I think we’re going to see a change.“

Many others are hoping so.