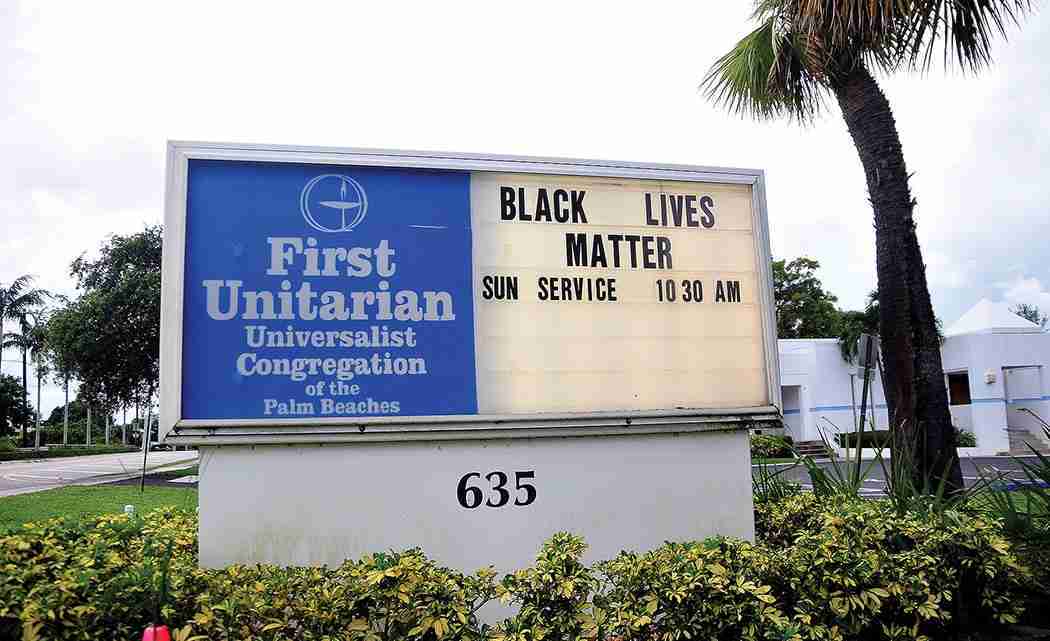 North Palm Beach, Fla. —The Reverend CJ McGregor’s support of Black Lives Matter has apparently touched someone’s nerve. McGregor, who is white, pastors the predominantly white First Unitarian Universalist Congregation of the Palm Beaches, located at 635 Prosperity Farms Road in North Palm Beach. The church has thrown its support behind the Black Lives Matter movement and he had planned to deliver a sermon revolving around the issue on Sunday, September 6. Prior to that, he posted a sign in front of the church which read: “Black Lives Matter.” The sign was inside a glass enclosure, but otherwise unguarded. The sign apparently enraged someone, and they broke the glass enclosure and put a piece of paper over the word “black,” and wrote the words “White Lives Matter,” defacing his sign. The pastor said it is clear, someone was unnerved by the “Black Lives Matter” sign posted on the church marquee.

The vandalism will cost the church about $1000, but it’s the principle that really matters, says the pastor. Many  whites just don’t understand the movement, says McGregor, and it’s making them uncomfortable. The vandalism at his church proves that to be the case. “It tells us that we’re touching on something in our community that’s making people uncomfortable,” he said in a previous interview. “By saying that black lives matter, we’re not saying black lives are the only lives that matter or that they matter more than other lives,” he explained. However, he points out that oppression still exists, which is why his church is passionate about the movement. McGregor didn’t cancel his intended sermon as a resort of the incident. Instead, he went on to speak about it during his service as planned. “Of course all lives are important,” he told the congregation. “But we’re focusing on the oppression of people of color in our country.” McGregor says the movement is misunderstood. He points out that it is not anti-law enforcement. “We will not align ourselves with any organization that is anti-law enforcement,” he said. His congregation, which is majority White, agrees with the support and is outraged at the vandalism.

The Black Lives Matter movement has gained popularity with the killing death of young blacks at the hands of police. The movement started with the death of teenager Trayvon Martin, who was killed by neighborhood watchman George Zimmerman in Sanford several years ago. Zimmerman was acquitted in July 2013, sparking the movement. Largely through social media, Black Lives Matter became more prominent with the deaths of two more unarmed black men –Michael Brown in Ferguson, Missouri and Eric Garner in New York City. Both men were killed by White police officers, leading to further outrage among the black community. Since then, more high profile deaths have occurred at the hands of police officers, lending even more prominence to the movement.

The Unitarian church is billed as a liberal religious movement with a strong focus on social justice.

McGregor, in a text message, said he and his congregation are grateful for all the positive attention and support they’ve received since the vandalism, but they are now  ready to put the incident behind them and continue their focus on social justice. They have no plans to discontinue their support of Black Lives Matter.

Police are continuing their investigation into the vandalism at the church.