black-ish aims for everyone and Kiefer Sutherland is back 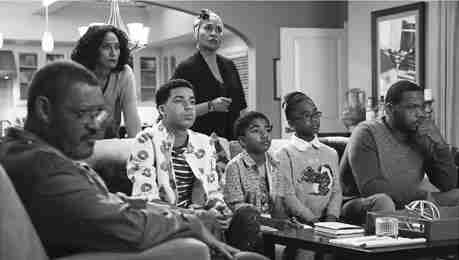 BEVERLY HILLS, Calif. – A roundup of news from last week’s sessions of the Television Critics Association summer meeting, at which TV networks and streaming services are presenting details on upcoming programs. black-ish AIMS TO BE COLOR-BLIND

ABC’s hit comedy black-ish dwells on an African American family, but Kenya Barris, the show’s creator, says he isn’t interested in profiling who sees it. “It’s ridiculous: Everything is about black

they’re and white,” he said. “It doesn’t matter who’s watching our show. What counts is, watching it. “I would be so happy when ‘diversity’ is not a word,” he continued during a panel discussion with the show’s producers and all-black cast. “These are amazing, talented actors who are giving it their all. We’re so tired of talking about diversity at every panel. The question of diversity clouds the conversation.”

Even so, Barris disclosed that roughly one- fourth of the audience is black, with much of the rest presumably white-ish. “Sometimes those questions can skew the

cautioned Tracee Ellis conversation in a direction that does not help the conversation,” Ross, who co-stars with Anthony Anderson as the upper-middle-class parents of four youngsters.

Anderson said he hears the same thing about the show from its fans, whatever their color or ethnicity: “When I see your family up there on that screen, I see mine.”

black-ish, which won a Peabody Award this year and is nominated for three Emmy awards, returns for its third season on Sept. 21.

It certainly clicked for Kiefer Sutherland, its star, when he first read the pilot script.

“I had no intention of doing a television show,” he told assembled TV writers. “But I remember getting to the end of the script and realizing I was potentially holding the next 10 years of my life in my hands.”

Sutherland stars as a bottom-level cabinet member who is suddenly appointed President of the United States after a catastrophic attack kills the incumbent chief executive and most of his administration.

More than any TV creator could have dreamed, the series arrives at a cultural moment when “there’s a hunger for outsider candidates,” noted producer Simon Kinberg. The show’s hero is “a political outsider, so he’s coming to it in an innocent way. He is uncorrupted, at least at the beginning of his term. There’s a Frank Capraesque aspect to the show.”

Sutherland said he’s confronting one big adjustment with this role after his many years on 24 as Jack Bauer, an almost super-human defender of presidents and the free world. Now, as President Tom Kirkman, he is surrounded by hulking actors who play Secret Service agents protecting him. “I’ve never felt so short on a show in my life,” he confided.

Next post For healthy, forgiving cooking, try a foil pack in the oven