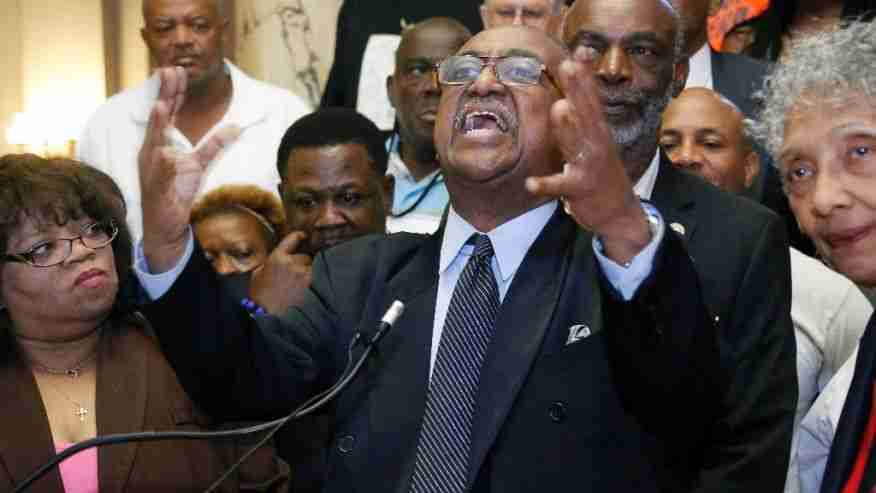 By KATHLEEN FOODY
A monument to the Rev. Martin Luther King Jr. must not be installed among the sculpted figures of Confederate leaders at Georgia’s Stone Mountain, a group of civil rights leaders told the state’s governor Wednesday.

“We will never agree to any aspect of Dr. King going to Stone Mountain among the Confederacy,” Southern Christian Leadership Conference president and CEO Charles Steele, Jr. said after the meeting with Gov. Nathan Deal. “The Confederacy, once and for all, should be buried in a museum.”

Officials with the SCLC and two local chapters of the NAACP met with Republican governor for an hour at his office, and later said he was “receptive” to their concerns. Deal may have the influence, if not the authority, to stop the process, Steele said.

The organizations next hope to meet with the park’s governing board. Officials have proposed a replica Liberty Bell honoring King to “broaden the story told by the park.” The site is best known for a giant carving of three Confederate figures on horseback spanning three acres of the mountain’s face.

The June massacre of nine worshippers at a Charleston, South Carolina, church and the arrest of a white suspect who embraced the Confederate battle flag sparked widespread debate over the public display of Confederate symbols. A flag that flew outside South Carolina’s state Capitol for decades came down, and statues of Confederate leaders have been removed from places of honor on state university campuses and other government property around the South.

Georgia law prohibits changing the Stone Mountain carving or altering the property’s use as a memorial. Lawmakers haven’t said whether they will take up legislation to address that _ however the appointed board that oversees the property believes additions are allowed under current law.

Bill Stephens, chief executive officer of the Stone Mountain Memorial Association, said in a statement this week that the proposal to honor King and add an exhibit on black Civil War soldiers evolved from a bell-ringing ceremony atop the mountain marking the 50th anniversary of King’s “I Have a Dream” speech.

After the Charleston shooting, the Atlanta NAACP called for the carving of Confederate President Jefferson Davis, General Robert E. Lee and General Thomas “Stonewall” Jackson to be sandblasted from the mountain and for nearby Confederate flags to be removed. Supporters of Confederate heritage rallied this summer at the park, carrying large Rebel flags.

Lecia Brooks, outreach director at the Southern Poverty Law Center, said the civil rights group is encouraged by the number of Confederate symbols removed from government property or moved to museums recently. Brooks said adding more complete historic information to the displays is an alternative to removal. The objects become a chance to educate, rather than celebrate the Confederacy, she said.

“You can’t just put the hero and icon of civil rights movement next to these Confederate images and have it be OK,” Brooks said. “It’s not the memorial he deserves, and it takes away from the true conversation about addressing these symbols.”