Farrakhan’s ‘Justice or Else’ Rally In D.C. 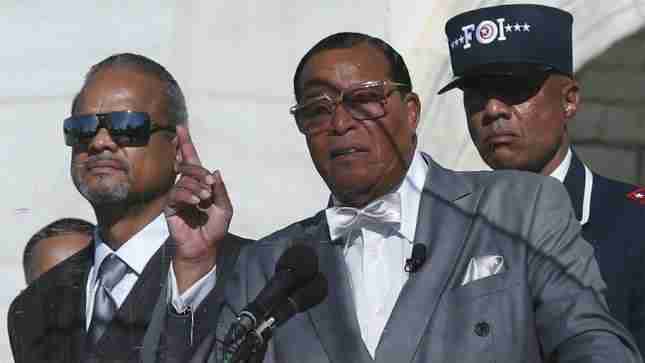 WASHINGTON — Speaking to hundreds of thousands of people on the National Mall, Nation of Islam Minister Louis Farrakhan called for justice. He urged African-Americans, Latinos, American Indian Tribes and others to “take action.”

The rally addressed a range of grievances connected to justice including calls to stop deportation and to reduce mass incarceration and aborting the unborn.

“The Republicans have, I don’t know how many, is it 17? Well it was,” Farrakhan said on the National Mall. “And they are really like the pretty girl who is well-formed, showing her wares, so that some man with money will buy her. Who wants to be a whore?”

“Do you think people with money put their money behind you if they don’t expect something from you?” the Nation of Islam leader asked.

Farrakhan, addressing a crowd in the shadow of the Capitol Building, also condemned Congress for selling out the public good to special interests.

“$3.3 billion in the last few years has been paid by lobbyists to this house,” he said, pointing to the Capitol. “Well what are they lobbying for? Laws that may not be in the best interest of the people. How then can you look in the mirror at yourself, when you are a bought-and-paid-for whore? And then what do you get for being a whore?”

The religious leader also called on men and women to treat each other with decency.

“May I pause for a moment and say to women: Your language must change as to how you address yourselves. You should never call another woman a ‘bitch,’” Farrakhan said. “Get that word out of our language. No female is after a dog. Every female is after God.”

Farrakhan, speaking behind bulletproof glass, also made an impassioned argument against abortion during his remarks, which lasted over an hour.

Farrakhan was one of dozens of speakers at the “Justice or Else!” march, which is building on the Black Lives Matter movement and calling for reforms in policing and the criminal justice system amid escalating racial violence.

Representatives from the families of Michael Brown, the 18-year-old who was killed in Ferguson, Mo., and Trayvon Martin, a 17-year-old killed in Florida, were in attendance at the rally.

Farrakhan, 82, called for 10,000 men to help address crime in the African-American community.

“I want 10,000 names that we can train ‘cause we got to stand between the guns,” he said, alluding to both black-on-black crime and the killing of unarmed black people by police.

He also listed a range of other “instructions,” including doing more to educate children in schools that promote “white supremacy,” and focusing on Jesus instead of Santa this Christmas.

“Today is both a call and a demand to come together and focus on not what divides us but on what unites us,” said the Rev. Willie Wilson, a Washington minister who was one of the organizers of the gathering. “Let us bind ourselves together, stick together, stand together, demand together.”