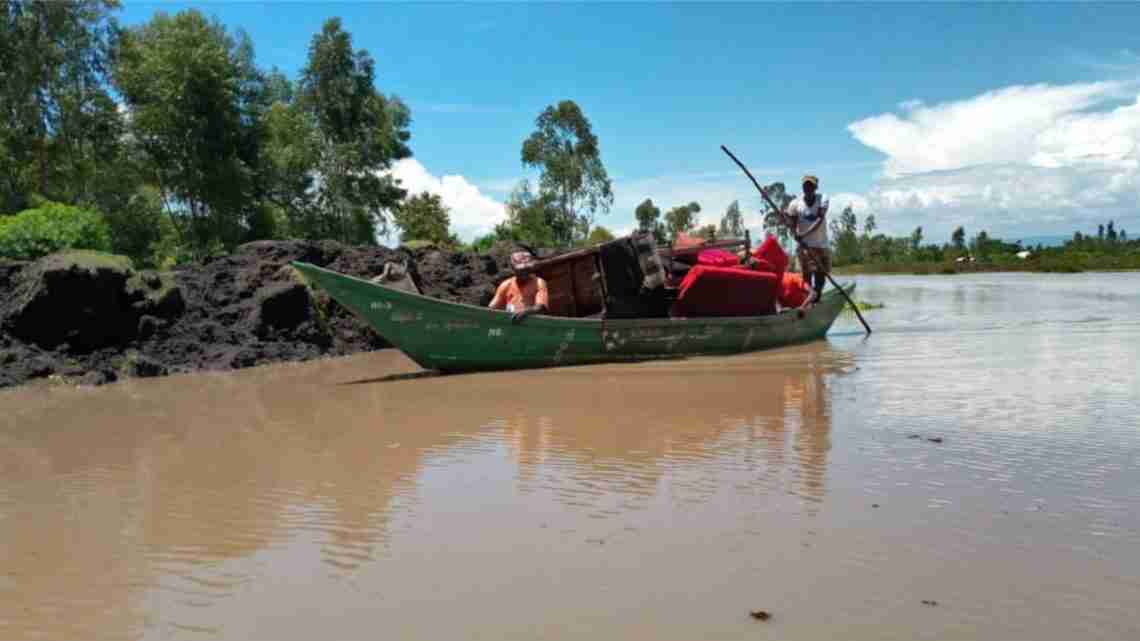 Floods are sweeping across western and central Kenya, killing more than 120 and displacing roughly 1 million Kenyans.

At least 29 counties and 100,000 households have been affected by floods as residents seek refuge on higher ground, said Minister Eugene Wamalwa, who oversees 47 counties from the government’s offices in Nairobi. Areas affected are largely in the Eastern Rift Valley in the western, southwestern and central part of Kenya, an area rich with wildlife, agriculture and shallow lakes.

“We have experienced a lot of problems since these rains started,” said Caren Akeyo, a middle-aged woman and mother of four, who farms and maintains a small business in Nyando Market in Kisumu county, located on the edge of Lake Victoria. “We have been pushed away from our homes. Floods have really taken a toll on us. I have been forced to shift five times.”

The more than two weeks of pounding rains and the floods come on top of COVID-19, a continuing locust invasion and a severe drought in the eastern part of Kenya earlier this year.  In a country where 75% of the gross domestic product depends on agriculture, farmers have watched their crops wash way.

Kenya’s Red Cross is providing food and other items in the most devastated areas.

“In this distribution, we have managed to reach 150 households, but in total we have more than 500 that have been affected in this area,” Kenya’s Red Cross Secretary General Aisha Mohamed said. “We had to identify the most vulnerable. We have the elderly, pregnant women and lactating mothers. We have given non-food material, mostly shelter material.”

Complicating these efforts are social distancing rules to curb COVID-19.  The Red Cross is working to uphold the World Health Organization’s regulations to mitigate the spread of the virus, but efforts are “difficult,” said Mohamed.

Some seasonal flooding is not unusual in this region, but the severity of these floods has overwhelmed the communities. Without a water management system in many parts of the country, rivers and lakes are prone to overflow.

“There’s a blockage at the bank of River Nyando which is making the water overflow to the villages,” said Justus Abong’o from Ombaka village south of Kisumu city, a lush agricultural area near Lake Victoria.

The Nyando River, a 240-kilometer source of irrigation and water in Kisumu county, has flooded the area in the past as natural debris piles up along the banks.

“We have been speaking since the last floods that the solution of this problem is building of dykes,” said Abong’o. Dykes have long been recognized as a way to control water overflow in the rural areas.

Local schools have turned into refugee centers, said Abong’o, who serves as chairperson for a refugee center while his relatives are also displaced and seeking refuge. Most Kenyan villages have three government-operated schools, which can quickly be refurbished into emergency centers.

Along the border with Uganda in Busia county, residents have deserted their villages for higher ground as most of the houses have been submerged. “The situation is unfortunate, and we appeal for urgent support for the people,” said Member of Parliament Raphael Wanjala.

“The situation is so bad in Budalang’i, the dyke broke and it let in a lot of water,” said Wanjala. “The problem we are facing in Budalang’i is that we have had backflow from Lake Victoria since last year and again we are having floods from the heavy rains. We have a complex of a problem at the moment. We need assistance from all corners.”

Landslides in West Pokot and Elgeyo Marakwet, deep in the Rift Valley, killed 36 people as of Saturday. The police halted a missing persons search with the continuing downpour.

The Kenya Meteorological Department has warned of heavy rains, floods and mudslides continuing in most parts of the country through at least June.

“The risk of flooding, the risk of mudslides is increasing, and I would request and really plead all Kenyans to follow the advice that is coming from the Ministry of Interior, from the metrological people, that please lets us move to higher grounds, let us move from areas that have the potential of wreaking havoc,” said President Uhuru Kenyatta. “We mourn the lives lost in West Pokot and Elgeyo Marakwet and my administration continues to make every effort to support affected families and communities across the country.”

Kenyatta’s ancestral home is in central Kenya, which also has been affected by the floods.

A police vehicle was swept away, killing 7 police officers on a night shift duty patrol on Thursday. The Kenya police force has formed a multi-agency team to search for remains of 5 of the officers, said Rift Valley police commander Marcus Ochola.

Next post Malik Yusef raised more than $10,000 to help slow COVID-19 behind bars