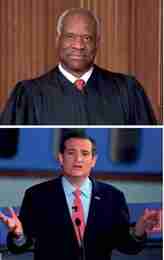 WASHINGTON – Republican Sen. Ted Cruz says the Smithsonian has made a mistake by not including the “extraordinary accomplishments” of Supreme Court Justice Clarence Thomas in the new National Museum of African American History and Culture.

In a letter to leaders of the Smithsonian Institution on Monday, the Texas senator says he was deeply disturbed to learn that Thomas is only briefly noted in the context of his contentious 1991 confirmation hearings, when he faced allegations that he sexually harassed Anita Hill when they were colleagues in the federal government.

“I am concerned that millions of Americans, of all ages, races, religions, and walks of life, when passing through this museum, will be subjected to a singular and distorted view of Justice Thomas, an African- American who survived segregation, defeated discrimination, and ascended all the way to the Supreme Court,” Cruz wrote.

Thomas has long been a hero to conservatives, but remains a pariah among civil rights groups. He’s been fierce opponent of affirmative action and voted with the conservative majority to block a key part of the Voting Rights Act designed to protect minority voters from discrimination.

Cruz, who was once a law clerk at the Supreme Court, shares Thomas’ philosophy of adherence to the original text and meaning of the Constitution.

“Justice Thomas’ dramatic journey from enduring entrenched racial discrimination to serving on the highest court in a country of 320 million people is one that should be shouted from the rooftops to all Americans, regardless of race or ethnicity,” Cruz wrote.

A spokesman for the Smithsonian Institution did not immediately respond to a request for comment.

Thomas recently celebrated 25 years on the court, and is “known behind the scenes as one of the most jovial, down- to-earth, and gracious personalities to ever don the robe,” according to Cruz.

In the letter, Cruz says the first and only other African-American Supreme Court justice, Thurgood Marshall, is briefly praised in the museum. He suggests an exhibit on Marshall and Thomas and their different judicial approaches.

“To be clear, I am not petitioning for a partisan hagiography of Justice Thomas, nor am I asking that everything critical of him be excluded,” Cruz wrote. “I am simply requesting that a fair and accurate portrayal of his powerful story be included, for the great benefit of millions of future museum- goers.”

South Carolina Sen.Tim Scott, African-American Republican in the Senate, sent Smithsonian directors a similar letter earlier this month. And a group of Republican senators led by Cruz’s Texas colleague, Republican Sen. John Cornyn, introduced a resolution to encourage the museum to give Thomas a prominent place in its exhibits.

Previous post Jesus is the reason for the season