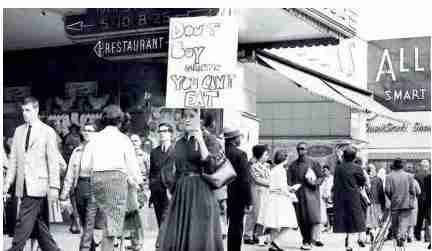 In this March 12, 1961 photo, members of the Congress of Racial Equality (CORE) picket outside McCrory’s Department store in New Orleans to protest the five-and-dimestore’s policy of segregating lunch counter customers.

PHOTO COURTESY OF LIBRARY OF CONGRESS

NEWORLEANS – A new oral history project is looking at the civil rights era in New Orleans, including boycotted shopping districts and a restaurant that provided a meeting place for black and white activists.

The Historic New Orleans Collection has begun interviewing leaders and activists who participated in the civil rights movement from 1950 through 1976, and will create a set of lesson plans using the oral histories it gathers.

The National Park Service provided $23,000 to gather 30 to 50 hours of oral histories about 11 locations, organizations and events including the city’s first major civil rights campaign – a boycott of white-owned stores that sold to African Americans but wouldn’t hire them as clerks or cashiers.

The slogan was “Don’t shop where you can’t work,” said Eric Seiferth, assistant curator at the museum.

The boycott of shops on Dryades Street, then a major shopping district for black people, began shortly before Easter, a season when people bought new spring dress-up clothes.

“They had some success in getting merchants to hire African Americans above the menial level,” Seiferth said. “That’s a big moment in the movement, too.”

He said students who led the boycott created a New Orleans chapter of the Congress for Racial Equality later that year, and led years of sit-ins and years of picketing at stores on Canal Street _ two of the other focuses for oral histories.

In the 1980s, the once boycotted business section of Dryades Street was named for Oretha Castle Haley , who, as Southern University student Oretha Castle, was among the CORE chapter’s founding members and its first president.

She also was among four protesters arrested for a 1960 sit-in at a Canal Street lunch counter, a case in which the U.S. Supreme Court ruled that a state “criminal mischief” lawmaking it a crime to stay in a business after being told to leave was being used to violate the 14th Amendment’s equal protection clause.

The house where she and her sister, Doris Jean Castle, grew up will be another interview focus, Seiferth said. “It was a center for a lot of the families active in the movement,” he said. “People coming in from out-of-state would stay there and have something to eat. They housed freedom riders, also.”

The girls’ mother, Virgie Castle, was a waitress at Dooky Chase restaurant, another project focus.At a time when he mayor and police publicized use of the criminal mischief law to break up sit-ins, and testified that they knew of no integrated eating place in NewOrleans, Edgar ” Dooky” Chase Jr. and his wife, Leah Chase regularly served black and white civil rights workers as they met upstairs. Leah Chase still runs the restaurant.

“The hope is not only will we be able to use it … for future exhibitions or programs or educational materials or whatever, but the public will be able to come in and use the material for whatever they’re doing – whether it be a documentary or undergraduate thesis or a high school student trying to write a research paper,” Seiferth said.

Next post Hurricane: Miami homeless removed against their will