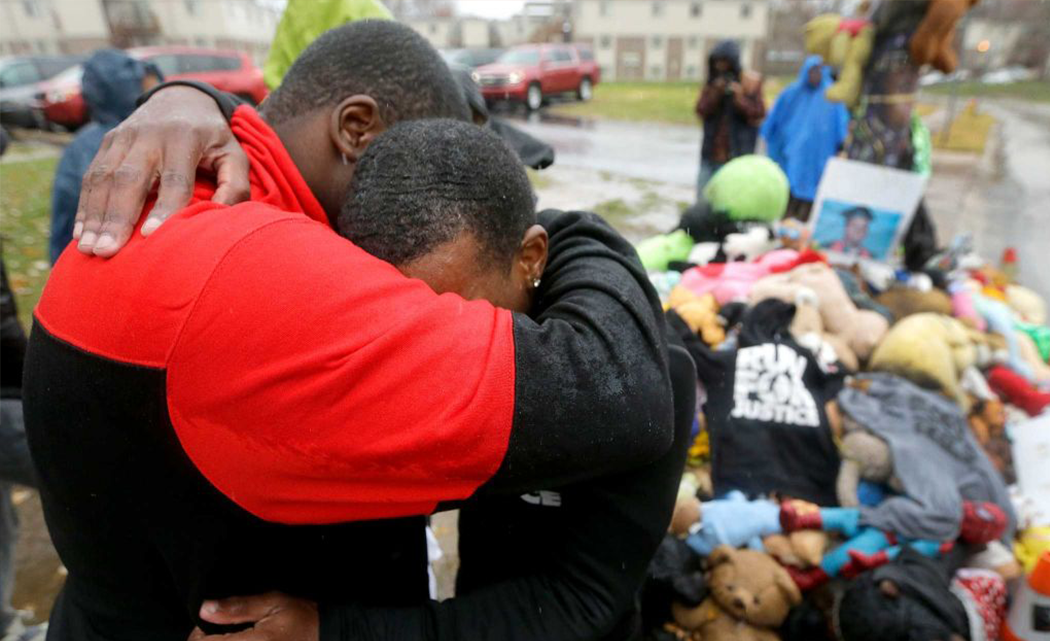 FERGUSON, Missouri (AP) — Anxiety and speculation mounted Sunday in the St. Louis suburb of Ferguson as residents awaited a decision by a grand jury on whether to indict a white police officer in the shooting death of an unarmed black 18-year-old.

More than 31/2 months have passed since police Officer Darren Wilson killed Michael Brown after a confrontation in the middle of a street in Ferguson. The shooting triggered riots and looting, and police responded with armored vehicles and tear gas. The incident reignited debate over how police deal with young black men, and drew attention to racial tensions simmering in U.S. communities four decades after the civil rights movement of the 1960s. Two-thirds of Ferguson’s residents are black but the police force is almost entirely white.

Many in the St. Louis area thought a grand jury decision on whether to charge Wilson with a crime would be announced Sunday, based partly on a stepped-up police presence in the preceding days, including the setting up of barricades around the justice center where the panel was meeting.

The grand jurors met Friday but apparently didn’t reach a decision, and they were widely expected to reconvene on Monday, though there was no official confirmation of that. Grand juries, composed of regular citizens, determine only whether probable cause exists to indict a suspect. If the jury indicts Wilson, a separate trial will be held to decide whether to convict or acquit him.

During church services Sunday, some pastors encouraged their flocks not to fret.

“Everybody stand to your feet and tell somebody, `Don’t be afraid. God is still in control,”’ Jones said as church members repeated after him.

The Rev. Freddy Clark of Shalom Church in nearby Florissant told the mostly black interdenominational congregation that “justice will be served” whichever way the decision goes, because God will take care of it.

“None of us are pleased about what happened,” said parishioner James Tatum. “Whatever the verdict is, we have to understand that’s the verdict.”

As they wait, some people have continued daily protests, while speculation has grown that the delays are intentional.

“People feel like it’s been engineered, so that the results wouldn’t come out until after the election and until the weather got cold, and it would be more difficult to protest,” said Susan McGraugh, supervisor of the Criminal Defense Clinic at the Saint Louis University School of Law. “It’s really adding fuel to the fire.”

Wilson has remained out of public view since the shooting, though CNN reported Sunday that he has met with network anchors to discuss possible interviews. Don Lemon and Anderson Cooper, both of CNN, each said on Twitter that they had met with Wilson.

St. Louis County Prosecutor Bob McCulloch had said he expected a grand jury decision by mid-to-late November. But that’s not ultimately in his control.

The 12-person grand jury deliberates in secret, without McCulloch, and sets its own schedule depending upon when the members are available.

Downtown STL Inc., a St. Louis civic group that promotes downtown businesses, told members in an email Saturday that the grand jury will reconvene Monday to continue deliberating. The email did not explain how the group knew that, and McCulloch’s office has not commented on the grand jury’s schedule.

When the panel reaches a decision, it will be up to McCulloch to publicize it.

Sunday would have been an opportune time to minimize disruptions from protests, since schools and governments are planning on only a partial work week because of the Thanksgiving holiday on Thursday, said Peter Joy, a law professor at Washington University in St. Louis. He said Monday or Tuesday would still make sense.

But “my belief is that with the holiday, releasing it on Wednesday, Thursday or Friday would produce a negative reaction,” Joy said.

Next post The top iPhone and iPad apps on App Store

Previous post Tameka “Tiny” Harris: The eyes have it!