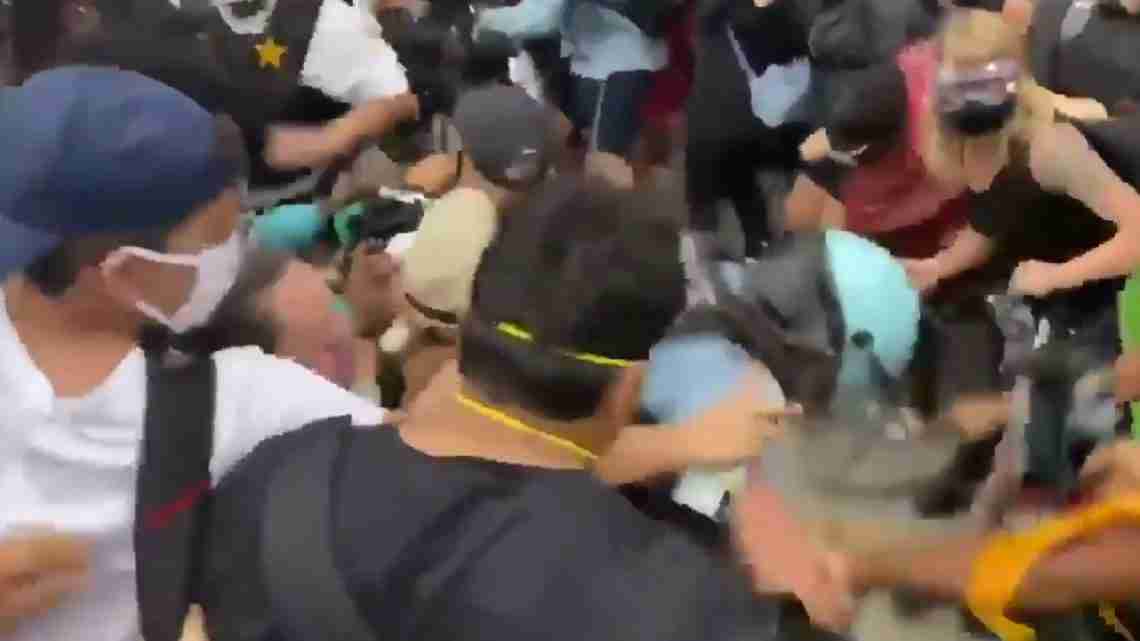 Chicago’s summer of unrest because of strained relations between the police and minorities continued unabated this past weekend, with protesters clashing with authorities and police releasing videos of those who looted high-end stores in the city’s core earlier in the week.

The latest dust-up took place near downtown Saturday, when clashes broke out between marchers (some of whom had donned rain ponchos to identify each other and used umbrellas to help conceal their actions) and police.

A melee between those two groups broke out in the late afternoon, and it included one officer being repeatedly hit on the head with a skateboard. Subsequently arrested in connection with that incident was Jeremey Johnson, 25, from the Lake View neighborhood, who was charged with aggravated battery of a peace officer.

Jeremey Johnson, 25, has been charged with felony aggravated battery to a peace officer after repeatedly striking a #ChicagoPolice officer in the head with a skateboard at yesterday’s downtown protest. https://t.co/OChnGsGmBd pic.twitter.com/CF4Y6gtCpO

The Chicago Police Department said on Twitter the officer was wearing a protective helmet and only sustained minor injuries. He was treated at a nearby hospital.

Police said they also arrested three others in connection with the protest: Nicoline Arlet, 24, was charged with a felony count of theft after she allegedly ripped a body camera off a cop during the protest; 18-year-old Elena Chamorro was charged with a felony count of aggravated battery to a peace officer and one misdemeanor count of mob action; and Shaundric Mann, 24, for hitting a cop in the face with a bullhorn while resisting arrest. The department said that another officer suffered a wrist injury while taking Mann into custody.

Meantime, the department has also released more images of those looting shops in the early hours of Aug. 10, asking for the public’s help in identifying them. Police say hundreds of looters responded to social-media calls to descend on the city’s upscale Magnificent Mile and other shopping areas in the city’s downtown in the aftermath of police shooting a man that authorities said fired on them first.

The footage released by the police involved these locations:

Allegations of police brutality and excessive force like those being voiced in Chicago have been in the media spotlight since a black man, George Floyd, died at the hands of police in Minneapolis in May. Floyd’s death and the subsequent ascendance of the Black Lives Matter movement have sparked protests across the United States and elsewhere.

(Jamie King contributed to this report.)