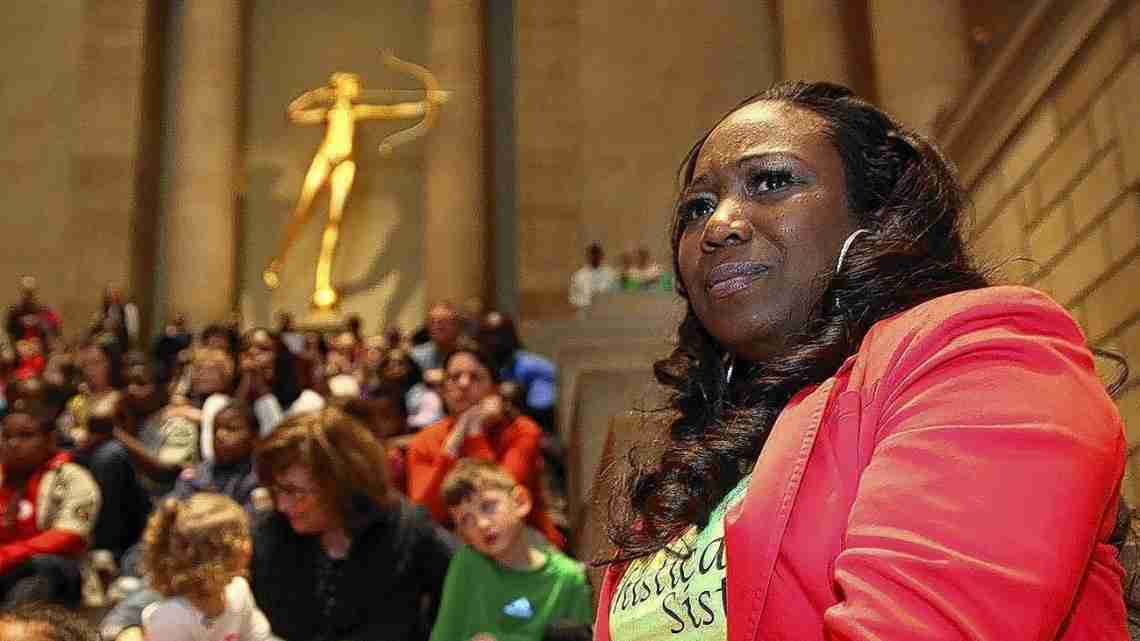 JULIET LINDERMAN
BALTIMORE (AP) – Every Wednesday for more than two years, Tawanda Jones has stood vigil, in front of City Hall, outside the state’s attorney’s office, on an East Baltimore street corner, in the freezing dark of winter, in the stifling heat of summer. Sometimes she is backed by supporters; sometimes she stands alone, a grim reminder of the deep divide between the police and the people of Baltimore.

Before the world heard of Freddie Gray, a black man who died from injuries suffered in custody, Jones’ brother, Tyrone West, 44, died under murky circumstances after his own encounter with Baltimore police. Jones has been demonstrating against police abuse since West’s death in July 2013, two years before Gray’s death sparked protests and riots and led the U.S. Justice Department to launch an investigation into allegations of excessive force and unwarranted stops.

“I never miss a Wednesday,” the prekindergarten teacher said. “I’m one person, and I can still make that difference to save someone’s life. I can’t bring my brother back, but I can stop someone from feeling this type of pain. I’ll be out there by myself,  it doesn’t matter.”

Since West Wednesdays began, the issue of race and police abuse exploded onto the national agenda with the killing of Michael Brown in Ferguson, Missouri, and a string of other incidents.

One recent Wednesday, as the sun set over Baltimore, Jones stood on the cobblestone walk beside a speaker turned toward City Hall. A handful of people joined her as she announced her tally.

“Eight hundred and nineteen days,” she said, her voice echoing through the square. “It’s been 819 days, 117 weeks, since my brother was brutally murdered by the police.”

On July 18, 2013, West, 44, was pulled over by police, who searched his trunk and ultimately tackled him as he resisted arrest. He died the same day at a hospital.

An internal affairs investigation stopped short of blaming the officers, but laid out a laundry list of tactical mistakes they made. The state medical examiner determined West died of a heart condition compounded by his struggle with the officers and the summer heat. His autopsy says officers used handcuffs and baton strikes to try to restrain him. Jones is convinced he was beaten; she has yet to receive autopsy photos, and was forced to wait five days before she was permitted to see West’s body.

“I’m not going to adjust. It’s like I tell my students: If you put a frog in hot water, he’ll jump out. If you put him in cool water and raise the temperature, he’ll slowly die. I feel like I’m watching my city adjust to this foolishness, and slowly die.”

Inside City Hall, Jones, who is 38, is a familiar name.

Democratic Councilman Warren Branch has asked for the West investigation to be reopened. And community organizations such as the People’s Power Assembly and the local branch of the NAACP as well as Johns Hopkins University have given Jones awards for her dedication to social justice.

Democratic Councilman Brandon Scott said while he may not agree with everything Jones says, she has become “a beacon, a vessel through which many people are speaking.”

“From the beginning, she’s been clear that she doesn’t think all cops are bad. What she wants is accountability for those, and not just her brother, but for all victims of police brutality,” Scott said. “If we had a thousand people like Tawanda stepping up to deal with the 1,000 issues in Baltimore, how much better would the city be?”

Outside City Hall, Jones, in a blue shirt emblazoned with her brother’s name, thanked the small crowd for coming.

“The struggle that we’re doing is not in vain, even though sometimes it might feel like it is. Sometimes I might stand here and there will be two people, sometimes there’s 200. But that won’t stop this fight, the energy, the determination inside of me to get justice for Tyrone West and all victims of police brutality,” she said. `’It keeps on happening and it’s part of this corrupt system’s plan. My family had to learn the hard way.”

Jones spoke about her life since her brother’s death, about Sandra Bland, an activist found dead in a Texas jail cell after her arrest for a minor traffic violation; and about Corey Jones, a young black man killed just days before by a plainclothes officer in Florida while he waited for roadside assistance.

“I don’t want my brother to be a statistic,” she said.

When she was finished speaking a man named C.J. Faulk stepped up to the microphone.

“I can barely stand to live in this city because of the treatment black people get,” he said.

“In the past two months,” he continued, “I’ve realized a deep love for this city. I realize that’s because Tawanda is here.”

Jones said she thinks about her brother every day. She has joined in demonstrations across the country with the relatives of Michael Brown; of Eric Garner, who died during an arrest by New York police officers; of Tamir Rice, a 12-year-old boy fatally shot by Cleveland police officers.

“I’m tired of meeting families,” Jones said. “I wouldn’t want to welcome another family member to this side of the road. It’s frustrating, it’s challenging. You have to start a new life with adjusting and coping. I have not yet had a chance to grieve. I have not grieved yet.”

Previous post Hollywood churning out flop after flop this season