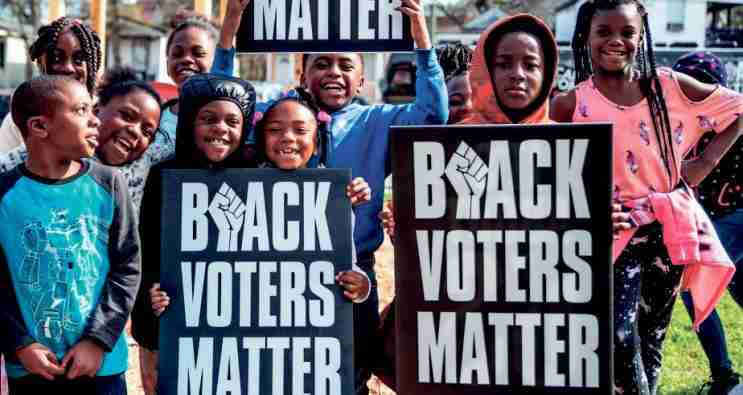 Initiative to Include Radio Ads, Digital PSAs, Voter Outreach “Caravan” in 11 Key States Today, Black Voters Matter Fund (BVMF) announced a major voter outreach initiative to educate, engage, and mobilize Black voters ahead of the November election. The initiative, which will span across 11 key Southern and Midwestern states, includes radio advertisements, digital PSAs, and a voter outreach “caravan” that will canvass major metropolitan areas through Election Day. Today’s announcement, which comes seven weeks before Election Day, is part of BVMF’s WE GOT THE POWER campaign, a series of power-building events to inform and engage Black voters, which has already reached more than 7 million people.

“With just seven weeks until Election Day, it is more important than ever that voters remain active, informed, and engaged,” said LaTosha Brown, co-founder of Black Voters Matter Fund and the 2020-2021 American Democracy Fellow at Harvard University’s Charles Warren Center for Studies in American History. “We are in the midst of a historic election year, one where Americans — particularly Black Americans — face the compounding crises of a global pandemic, recordhigh unemployment, police brutality, and rampant voter suppression. But with the power of our votes, we can hold leaders accountable and create a path toward change in our communities. Today, we are launching this initiative to continue building that power and to help Black voters use the power of the polls this November.”

“This year’s election will decide our nation’s trajectory not just for the next four years, but for a generation,” said Cliff Albright, co-founder of Black Voters Matter Fund and a 2020 recipient of the Open Society Foundation’s Soros Equality Fellowship. “With critical issues impacting Black communities on the ballot and important local, state, and federal seats up for grabs, Black voters must turn out in record numbers to begin building a system that works for us. We are proud to continue this work to engage Black voters in their own communities and help them tap into their voting power on Election Day.

Starting today, BVMF will launch radio advertisements and a voter outreach caravan to engage Black voters and drive voter turnout. The radio ads, which will air across multiple states through Monday, November 2, will encourage Black voters to “reclaim your power, use your voice, and vote…because we matter.” In addition, BVMF is deploying voter outreach caravans, led by 15-passenger vans that will canvass major metropolitan areas in the South and Midwest, including in the following states (listed alphabetically): Alabama, Florida, Georgia, Kentucky, Louisiana, Michigan, Mississippi, Missouri, North Carolina, Pennsylvania, South Carolina, Tennessee, and Virginia. BVMF is also continuing to build capacity for local, Black-led voter mobilization groups through training, funding, and staffing support.

BVMF will roll out additional events, tools, and resources in the weeks leading up to Election Day. This Friday, September 18, BVMF will partner with BET and the National Urban League for the first-ever “National Black Voter Day,” an effort to demystify the voting process for Black citizens during the COVID-19 pandemic. BVMF will also co-host the Hip-Hop Political Education Summit, featuring rapper Chuck D., Princeton University professor Dr. Cornel West, Georgetown University professor Dr. Michael Eric Dyson, Senator Cory Booker, and others on September 22, which is also National Voter Registration Day. In October, it will launch a digital public service announcement instructing voters in 11 states on how to fill out their ballots.

“We Got The Power” Campaign BVMF’s “WE GOT THE POWER” campaign consists of power-building events that inform and inspire Black voters to utilize their collective power and address community issues and challenges. This year, BVMF held a Virtual Bus Tour with civil rights advocates, policy experts, and health care professionals to engage Black voters in 13 states around the issues impacting their communities. At the height of the nationwide protests against police violence, it also created a Resistance Fund to provide bailout support to the grassroots organizations defending protestors. Through its outreach and voter mobilization work, BVMF has reached more than 7 million people and hopes to reach 10 million before Election Day.