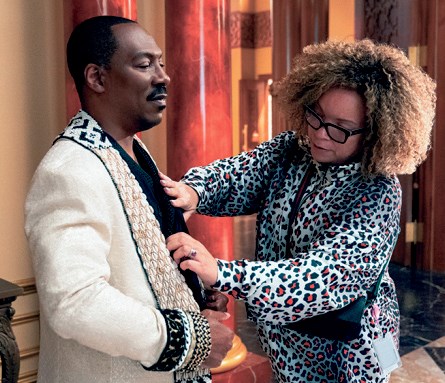 Black women and style are synonymous. The elegance, grace and culture of Black women has created a fashion history so rich and woven in the tapestry of time that our ﬁngerprints cannot be inextricably removed. When you think of Black women and fashion, does your mind wander to ancient Egypt and the splendor of Queen Nefertiti’s gemstone necklace adorned with turquois and sapphire and her noblesse painted on the walls of pyramids for posterity? Or does your mind drift to the statuesque women of the Maasai in Kenya, and their bountiful reds, red clay dyed dreadlocks and beaded collar necklaces? Perhaps recall the golden-brown hues of the women of the Zulu in South Africa, representing with colorful wide brim hats made of grass or straw, beaded headdresses, and beautiful draping silhouettes, reminiscent of their American distant cousins on Easter Sunday at the turn of the 20th century. The love of everything fashion is interlocked into the DNA of Black women. Black women and fashion ﬁt like a well-manicured hand into a satin glove.

In the late 19th and 20th century in American fashion design, there were notable Black women designers who put a deﬁnitive stamp on fashion and were sought after by ﬁrst ladies, dignitaries, celebrities and other discerning patrons of fashion design. When Mary Todd Lincoln moved to Washington D.C. after her husband, Abraham Lincoln, was elected the 16th president of the United States, there was talk in society circles about a proliﬁc dressmaker, Elizabeth Hobbs Keckley. Upon the recommendation of a senator’s wife, Mrs. Lincoln became a well-known client. Keckley designed more than a dozen gowns for Mrs. Lincoln within the ﬁrst six months of patronage. Keckley had learned to sew as a young slave from her mother who was a seamstress. She was able to use her skills to ﬁnancially beneﬁt her enslaved family and the family of her master, Hugh Garland. In 1855, Elizabeth was able to raise the $1200 necessary to buy her freedom and that of her son, George.

Keckley moved to Washington D.C. from St. Louis, Mo. in 1860 and began networking with clients in the area whom she had known from living in the South. One of those many clients was Varina Davis, wife of Jefferson Davis, soon to be the ﬁrst … and last president of the Confederate States of America. It was through a network of Washington connections that Mrs. Lincoln was introduced to the work of Keckley. Elizabeth and Mrs. Lincoln developed a strong friendship, and after the assassination of the latter’s husband, she entrusted her substantial wardrobe to Elizabeth to curate and display publicly for ﬁnancial purposes. However, after the publication of her memoir, “Behind the Scenes or Thirty Years a Slave, and Four Years in the White House,” in 1868, which detailed some illuminative, and embarrassing information about the Lincoln household and Mrs. Lincoln’s ﬁnancial woes, Keckley was subsequently blacklisted, and her business deteriorated. She was offered a position as head of the department of Sewing and Domestic Science Arts at Wilberforce University in 1892. In the Smithsonian Museum, an original purple velvet gown Elizabeth designed for Mary Todd Lincoln is on display.

Fast forward to the ﬁrst Black designer to open a fashion salon in New York City, in 1950. That honor goes to none other than Ann Lowe. Anne was born into a long family line of seamstresses in Clayton, Ala., in 1898. Her enslaved grandmother was a seamstress, and her mother was a dressmaker who specialized in embroidery. After working steadily designing exclusively for socialites in Florida for ten years, in 1917 she attended several college-level sewing courses in New York which bolstered her love and talent for design. Ann incorporated what she learned in New York and saw her business soar to new heights. She was able to move to New York in 1927. “I just knew that if I could come to New York and make dresses for society people,” she said in 1966 in the Oakland Tribune, “my dreams would be fulﬁlled.”

Lowe’s design ingenuity made her “famous among the wealthy American elite” for her one-of-a-kind debutante and bridal gowns “made of ﬁne fabric and handiwork, often evoking floral motifs,” according to fashion historians. She had a mastery of working with the ﬁnest in silk taffetas, chiffon, tuille and linen.

Lowe entered the halls of fashion history in 1953 when she designed Jacqueline Bouvier Kennedy’s breathtaking wedding gown which was indeed a showstopper. The New York Times gave an exhaustive description of its’ “ivory silk taffeta, embellished with interwoven bands of tucking, ﬁnished with a portrait neckline and a bouffant skirt.” While the newspaper detailed the bride’s and the bridesmaid’s gowns, the designer was purposely omitted.

Lowe was not a new acquaintance of Kennedy. Ann was the premier designer of the Auchincloss family having designed dozens of gowns for that family from 1947-1957. Lowe became one of the most celebrated and recognizable Black women designers of her day, and in fashion history. Her impeccable designs have been featured with proper credit in Town and Country, Vanity Fair and Vogue magazines, and she became a featured designer at Saks Fifth Avenue. Ann once opined on a daytime television show that her goal in life was not to seek out fortune or fame. She wanted “to prove that a Negro can become a major dress designer.”

“DESIGNER TO THE STARS”

During the resplendent career of Ann Lowe, there were other notable Black women in the world of fashion. One contemporary, Zelda Wynn Valdes, “fashion designer to the stars,” counted among her clients Ella Fitzgerald, Diahann Carroll, Mae West, Dorothy Dandridge, Ruby Dee, Marlene Dietrich, Marilyn Monroe and Josephine Baker. She opened a boutique in New York City, called Zelda Wynn, on Broadway and West 158th Street, in 1948. This boutique was for the crème de la crème of Black American society to shop comfortably in an otherwise segregated culture. At the height of Valdes’ popularity, she was commissioned with designing the entire bridal ensemble of Nat King Cole and his bride Maria Ellington. Valdes established the National Association of Fashion and Accessories Designers in 1949, which helped other Black women navigate their way around discrimination and promote racial diversity in the industry. In 1970, Valdes began a 20-year position as designer for the Dance Theater of Harlem.

Black women fashion designers today are enjoying a success that is unparalleled by the standards of their predecessors. Designers such as Tracy Reese, one of the ﬁrst Black women to become a board member of the Council of Fashion Designers of America (CFDA), has seen her womenswear line generate millions in revenue. Academy award-winning costume designer Ruth E. Carter, the artistic director behind the designs worn in “Black Panther” and “Coming 2 America,” recently had a star placed on the Hollywood Walk of Fame in honor of her 30-plus years of costume design in the entertainment industry.

Black women in the fashion world are becoming more visible due to social media outlets such as Twitter, Facebook and Instagram. Yet, on a larger scale, Black women fashion designers are still an enigma until someone elite or famous elevates them from obscurity. Fashion journalists and editors are virtually nonexistent and suffer from being marginalized or passed over. Anna Wintour, Vogue editor in chief, said in a memo last year: “I want to say plainly that I know Vogue has not found enough ways to elevate and give space to black editors, writers, photographers, designers and other creators. I know that it is not enough to say we will do better, but we will – and please know that I value your voices and responses as we move forward.” Wintour, a gatekeeper of the fashion industry for almost 40 years, has the power to throw open the doors of diversity to Black women fashion designers and make it possible for so many talented Black women to make their own mark in fashion history.

Note: The gowns of Ann Lowe and Zelda Wynn Valdes are at the Smithsonian African American Museum. A christening gown designed by Elizabeth Hobbs Keckley is also at the Smithsonian in the American Enterprise display. The famous Jacqueline Bouvier Kennedy wedding gown is on display at the John Fitzgerald Kennedy Presidential Library and Museum in Boston. tdwrites@gmail.com

Next post Assistant to director: The sweet rise of ‘Queen Sugar’ Glaude