BROWARD Coronavirus has hardened inmates frightened for their lives 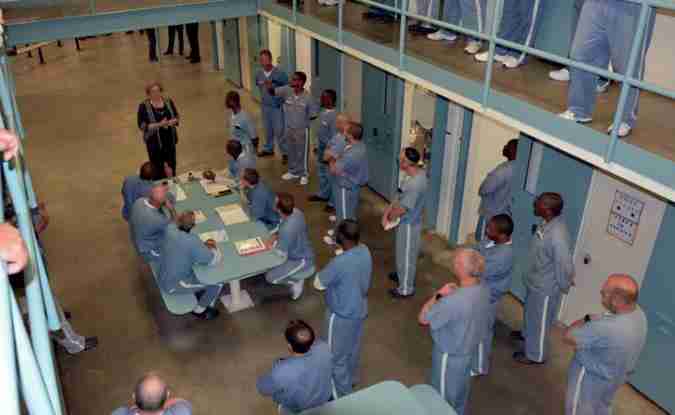 Fort Lauderdale, Fla. – Hardened inmates admit they’re scared of dying. No, not from people on the streets or fellow inmates, but from COVID-19. Penal institutions such as jails and prisons are the perfect breeding ground for the virus. Mathes Guice, president and CEO of the Community Reconstruction Housing Corp, Inc., and a 25-year former career law enforcement executive in Broward County puts it succinctly: "One little virus has turned the whole world upside down.” And while he may call it one "little virus," it packs a deadly punch the likes of which not seen in our lifetime. According to Wikipedia some 826,240 people have been infected in the United States as of Wednesday and 45,373 have died. Sadly, those numbers are literally growing each day.

According to Guice, prisons are not designed for social distancing, which means to stay six feet apart from the next person. Instead in most institutions’ inmates are packed like sardines one on top of another. Social distancing is just not happening as a practice in jails. Secondly, Guice stresses that many inmates enter prison with underlying medical conditions due to compromised immune systems due to poor health before they even walk through the doors. And third, inmates do not have protective gear such as masks and gloves to shield them from the virus.

Blacks make up the majority of the country’s 2.3 million inmates. According to the Pew Research Center, blacks have long outnumbered whites at penal institutions in this country. Recent statistics have shown that African Americans have been found to be more susceptible to the coronavirus and are more likely to die from it according to early data on the virus. Blacks are perishing at staggering rates from COVID-19. Some recent ﬁndings from multiple jurisdictions show that in some communities of color the rate of infection could be as high as 70 percent due to underlying health issues, lack of adequate health care, poverty, and lack of testing for the virus.

Add those factors to the prison population and it could be lethal, say experts, and has the potential to spread like wildﬁre. For instance, in Ohio, 1,300 inmates have tested positive. While Florida does not have such outrageous numbers, the number of positive cases in our institutions is mounting, just as they are nationwide. As of Monday, Florida Department of Corrections ofﬁcials say 119 inmates and 84 workers have tested positive across the state. Thus far, positive cases have been detected at 56 of the state’s facilities and at four probation ofﬁces. Florida has 145 facilities and 94,000 inmates, according to the Department of Corrections. And ofﬁcials say there have been four deaths from the virus, most in Central Florida facilities.

In the Broward Sheriff’s Ofﬁce (BSO) nearly all of the positive cases of COVID are African Americans. As of April 21, BSO had 20 positive cases and according to their media relations department, 70 percent of those infected are African Americans. It demonstrates that both inside and outside the criminal justice industry, blacks are bearing the brunt of this often deadly virus.

But Guice and other experts around the country have indicated it would be only a matter of time before coronavirus would spread like wildﬁre in penal systems everywhere. South Florida is no different. According to a Miami Herald report appearing in a court ﬁling on Tuesday, nearly half of the detainees at Krome, an immigration detention center in Miami-Dade, have tested positive and 350 others have been exposed to the virus and are now being quarantined. As of this week, Krome had a total of 587 detainees according to the report.

But what are ofﬁcials doing to curb the spread of the virus among inmates? And do inmates feel protected? Why are inmates believing they are likely to die while incarcerated from COVID-19? Why are they and their family members afraid for their precious lives?

According to the Sun Sentinel, Nereida Ortiz who lives in Miami, has advocated for the release of her son Raul Ponce Jr. currently incarcerated in Broward County Jail. Her son has tested positive for the virus and she wants him home. She believes the system will not give him proper care behind bars and has petitioned the courts for his release with an ankle monitor. To date, the courts have refused her plea. Her son is charged with burglary, drug trafﬁcking and racketeering according to the Sun Sentinel and has been in jail for three years. Ortiz says he has asthma, which is complicating his COVID diagnoses.

Department ofﬁcials say they are taking all measures to safeguard their inmates during this pandemic. Throughout South Florida, penal facilities say they are doing things such as screening detainees before they enter the general population; taking the temperature of all inmates; isolating inmates and staff who feel ill; and staff members are wearing masks and gloves. Some facilities are social distancing during recreation time and all report enhancing their cleaning methods.

Some ofﬁcials like State Sen. Bobby Powell said Florida needs to do more to protect the prison population. Powell, who leads the Florida Legislative Black Caucus, said his organization is calling for the early release of non-violent offenders, elderly and sick inmates, and those near the end of their sentences. The organization formally made their request by letter to Gov. Ron DeSantis April 7. Monday night, Powell received a response to their letter. But the response was not directly from the governor. Powell received a letter from Mark S. Inch, Secretary of the Department of Corrections, outlining all the measures the department is taking to safeguard its prisoners. But in the end, the secretary declined Powell and the caucus’ request.

It would not be prudent to release inmates back into society, Inch stated in his response letter to Powell. Powell stated in an interview with the South Florida Times Tuesday morning that he is ﬁrst of all highly disappointed that the governor didn’t dignify their request with a direct response of his own. "It’s problematic that we didn’t get a direct response from Gov. DeSantis," said Powell. And Powell said their rejection of the request is also problematic. "I think it’s also problematic that we put these individuals at risk of coronavirus. We have an obligation to keep them safe. I’ve visited many of the facilities throughout the state, and they can’t socially distance, and they can’t have hand sanitizer to adhere to washing their hands frequently due to its alcohol content. This is a disaster waiting to happen," he said.

Powell points out that the surge is already occurring. The FDC count of positive cases skyrocketed to 119 over the weekend. "This disease is very communicable. Many of these people are not serving life sentences. And because we’re putting them in harm’s way, and when we fail to act, people will die," Powell reiterated.

Friends and family of the detainees fear that same fate. William Dozier, 48, now lives in Birmingham, Ala. though he’s from Florida. His childhood friend is incarcerated in Gainesville in a work camp. Dozier fears for his friend’s life. "I’m very concerned about him because he can’t isolate or social distance. Yes, I’m concerned about him possibly dying because of this. It’s commendable that the senator wanted them released early. That’s an admirable solution," said Dozier.

Guice says prison and jail ofﬁcials have a real crisis on their hands. "There is no cure for this. How can you maintain and isolate it in this type of environment?" Clearly he says they must reckon with this dichotomy.

And while DeSantis has said no to the early release of some offenders, other states have released nonviolent inmates due to the coronavirus such as New York, New Jersey, Ohio, Colorado, California and more. Even the United States Justice Department’s Federal Bureau of Prisons reportedly has recently released certain non-violent offenders and medically ill offenders such as Michael Cohen, President Donald Trump’s former lawyer. This reportedly was a result of mitigating the pandemic.

In Palm Beach County, two prison advocacy groups, Florida Cares and Change Comes Now recently staged a protest outside the State Attorney’s Ofﬁce calling for the release of inmates due to the virus. Palm Beach County has not agreed to do so, but has agreed to lower the bond of some lower level offenders as a means of mitigating the virus situation.

Guice felt Powell’s idea for early release was a novel idea and plausible solution. As the former founder of a nationally recognized re-entry program, he knows ﬁrsthand the concept of second chances.

But for Powell it is more than about second chances. It is more about responsibility. "We have an obligation to keep this population safe. If not, they’re going to die from the coronavirus while incarcerated."

Guice, who is also an elder at his church, says though much appears bleak right now in the world, there are some silver linings.

With ofﬁcers arresting fewer people as a means of addressing the coronavirus pandemic and the various agencies facing the prospect of the early release of detainees, this is now an opportunity to do the right thing, Guice points out, “Maybe the justice system is put in a position to correct what it has done incorrectly all these years.”

“God has not been pleased,” he continued. “This is the time for all of us to humble our ways and to repent, reflect and to get it right.” After all, he says, “God works in mysterious ways.”