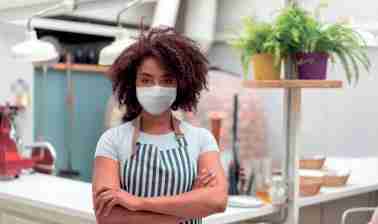 The Business Impact Awards are the FSMSDC’s reimagined annual awards, which had been presented during a dinner and dancing gala in the past.

This year, the FSMSDC pivoted to create a live online event, during which it will announce and honor the award winners with the theme, “A Celebration of Excellence in Supplier Diversity.”

The Impact Awards will recognize the achievements of Florida’s top minorityowned businesses, as well as major corporations, government agencies, health care and educational institutions, and dynamic industry leaders that are committed to supplier diversity.

“We feel that, during COVID-19, it is more important than ever to celebrate minority businesses, their successes and their resilience in the face of adversity,” said Beatrice Louissaint, president and CEO of the FSMSDC, a nonproﬁt organization dedicated to advancing access and growth for minority-owned business in Florida.

“And, we also want to honor the corporations, individuals and others doing great work in supplier diversity, even as they, too, face new challenges.”

Tickets are available at floridastateawardsgala.com.

Each ticket buyer will receive a unique link to attend the awards.

The FSMSDC will present 14 prestigious awards to organizations and individuals, including:

Advocate of the Year

•Dicky Sykes of the School District of Palm Beach County

Supplier of the Year Class IV (annual sales over $50 million)

Buyer of the Year

Local Corporation of the Year

National Corporation of the Year

Other awards to be presented: