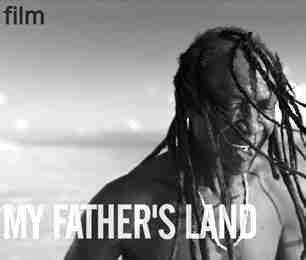 Clip from movie “Our Father’s Land,” being screened by Ayiti Images on July 29.

MIAMI – Ayiti Images Film Series continues its summer cinematic experience spotlighting Haitian identity issues in the Bahamas and the Dominican Republic with the award-winning documentary “My Father’s Land,” which follows a short fictional film “Purgatorio,” on Saturday, July 29 at 1 p.m. at O Cinema in Wynwood, 90 NW 29 Street in Miami. Tickets are $12.

In partnership with the Miami Book Fair’s “Read Caribbean” activities and O Cinema, Ayiti Images presents a compelling presentation of films exploring immigration through the perspective of Haitians living in the Bahamas and the Dominican Republic (DR).

Certainly a hot topic in the United States with pending negotiations regarding immigration rules on policies such as TPS (Temporary Protection Status), both these unique islands have been under fire and civil liberty rights have been called into question for their harsh treatment of Haitians and efforts to repatriate them.

Winner of the 2015 Amnesty International Human Rights Prize, “My Father’s Land,” directed by Miquel Galofré and K. Tyler Johnston, follows the journey of 64-year-old Papa Jah, who’s determined to visit his aging 104-year old father in Haiti – despite the danger of losing his right to return to the Bahamas, which is where he’s lived since age 18.

His journey takes place against the backdrop of the plight of members of the Haitian community, who either left their beloved homeland in search of a better future or were born in the Bahamas – but all of whom are now required to apply for citizenship or face deportation.

The film examines how Haitians have been portrayed and how identity issues have affected Haitians in the Bahamas, one of the most popular Caribbean destinations.

Preceding the documentary will be a short fictional film by Martine Jean, entitled “Purgatorio,” a film depicting the impact of the DR Constitutional Tribunal’s decision in September 2013 stating Dominicans of Haitian descent, even if they were born on Dominican soil, were not entitled to citizenship. The ruling rendered thousands stateless.

The film screening will be followed by a Q&A with the filmmakers.