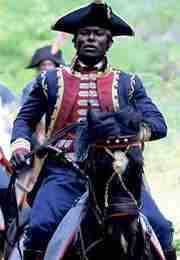 MIAMI – When Haitian American filmmaker Rachelle Salnave agreed to help some friends get exposure for their films in 2014, she didn’t realize it would morph into a movement.

The ‘it’ Salnave is speaking of is Ayiti Images, a traveling Florida Film Series that uses film and dialogue as platforms to show a more positive and varied image of the Haitian experience. Its overall mission is to help rebrand Haiti, educate people about Haitian culture and project an authentic voice that depicts Haiti from a humanistic perspective.

Now Ayiti is launching a new film series called “Books & Cinema” with a special screening of the historical biopic, “Toussaint Louverture” at 6:30 p.m. on Friday, May 5 at O Cinema, 9806 NE 2 Avenue in Miami Shores. The screening is being presented in collaboration with the Miami Book Fair and other community partners.

The film tells the story of Louverture, the military genius who led the first successful slave uprising leading to the independence of Haiti. Salnave said it’s an important, hallmark story.

“Toussaint Louverture is a dope film because it’s the first film that attempts to capture Haiti’s contributions to black liberation,” Salnave said. “It exposes audiences to the beauty and glory of the Haitian people.”

Originally from New York, Salnave said it was really hard being a Haitian growing up in the 80s and 90s.

“Haitians were stigmatized … they thought Haitians were black, nasty, ugly; these were the poor images my peers had. So when kids used to look at me it would be humiliating when people would … say you’re not Haitian, there’s no way you could be Haitian,”

Salnave recalled. “I couldn’t take it so I would say I was something other than Haitian until I got knowledge of self.”

Though she admits views about Haitians have evolved over the years, Salnave said there is still a lot of educating to be done in an effort to change the negative perceptions many still hold.

“The terrible images on the news and the propaganda to keep Haiti trademarked as ‘the poorest country in the Western hemisphere’ … that’s been our trademark,” Salnave said. “While Haiti does have a poverty problem, it’s also uniquely beautiful and amazing.”

Salnave said a lot of the poverty Haiti experiences is a direct result of certain interventions from the United States.

“It’s like when someone rapes you and then they blame you for being raped, that’s Haiti. The contributions of Haiti to America were never, ever told,” Salnave said.

“When I would leave home, (I heard) the constant story about slavery as opposed to when I would go home. My mom was a fascinating storyteller. She would tell me all these amazing stories about Haitians and the Bourgeoisie,” Salnave said. “Growing up in Harlem in a two-bedroom apartment eating crackers and Kool-Aid, we could only imagine in our minds what that would be like. I had these varied images of the black experience in my mind and that’s why I always wanted to tell these stories.”

With Ayiti she is doing just that. Other films that will be shown in the ‘Books & Cinema’ series include: “On the Verge of a Fever,” “My Father’s Land” and “Forever Yours.”

Since South Florida boasts the largest population of Haitians in the world outside of Haiti, Salnave thought it was the perfect place to tell Haiti’s less known stories.

“I always wanted to do something on Haiti and my Haitian culture and examine identity,” Salnave said. “I want to be able to shine in a city like Miami since LA is saturated.

Films selected for the series are highly acclaimed and award-winning works capturing an authentic aspect of Haitian life. Many are works by Haitian filmmakers.

In addition to showing their own film screenings and events, Salnave said they also curate events for other organizations. For example, Ayiti will also be involved with the upcoming Little Haiti Book Festival.

“There are all kinds of stories that we’ve shown thus far that are so different and unique. Every time I revert to Haiti, I really revert to humanity because Haiti is a part of humanity’s story,” Salnave said. “When I talk to other black folks I try to remind them that we’re all the same. We were just dropped off in different ports. The film next week, while it is on Haiti, it’s a universal story about freedom. ‘Toussaint Louverture’ is a universal hero for humans to aspire to.”

Tickets for Friday’s screening are $16 general admission, $13 for students/seniors and free for kids under age 10.

Next post Jazmine Sullivan to Beyonce: Lets make Lemonade together!