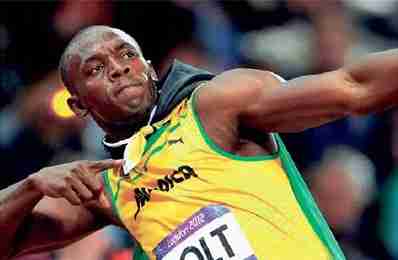 GENEVA (AP) — Usain Bolt has lost one of his nine Olympic gold medals because of a doping case involving Jamaican teammate Nesta Carter.

The IOC said Wednesday that Carter tested positive for methylhexaneamine, a banned stimulant, in re-analysis of samples from the 2008 Beijing Olympics.

Olympic rules state that the entire relay team can be disqualified and stripped of medals if one runner fails a doping test.

Carter and Bolt were teammates on the winning 4×100-meter team, which set a world record of 37.10 seconds. Carter ran the opening leg, and Bolt took the baton third in a team that also included Michael Frater and Asafa Powell.

“The Jamaican team is disqualified,” the IOC said in a statement. “… the corresponding medals, medalist pins and diplomas are withdrawn and shall be returned.”

The relay title in Beijing completed the first of Bolt’s gold medal sweeps in the 100, 200 and relay at three straight Olympics.

Bolt set world record times for all three sprint titles at the Bird’s Nest, establishing himself as the defining superstar of Olympic track.

“I want to share it with my team,” said Bolt said after completing his hat trick in 2008. “It’s down to them that I beat the world record today. When you beat the relay world record, you feel four times happier.”

Bolt and Carter will retain their gold medals from Jamaica’s relay win at the 2012 London Olympics — in a record time of 36.84 seconds that stands today. Bolt ran the final leg on that team. He took the baton from Yohan Blake, who served a ban in 2009 for ingesting the same substance as Carter.

Carter and Bolt also helped lower their relay world record between the Olympic titles, taking gold at the 2011 world championships in Daegu, South Korea, in 37.04. The 31-year-old Carter has teamed with Bolt on three straight world championship relay-winning teams, from 2011 through 2015. He also took an individual bronze in the 100 in 2013 in Moscow, behind Bolt and Justin Gatlin of the United States.

Carter, who did not compete at the Rio de Janeiro Olympics, faces a ban from the IAAF.

Trinidad and Tobago is in line to get the gold medal from 2008, Japan could be upgraded to silver, and fourth-place finisher Brazil could get the bronze medal.

Carter testified by videoconference to an IOC disciplinary hearing held in Lausanne on Oct. 17.

The IOC’s ruling states that Carter noted he was taking supplements in 2008 “advised in this respect by his coach, Mr. Stephen Francis.”

“The athlete explained that he had given several samples for doping controls whilst he was taking Cell Tech and Nitro Tech before the 2008 Olympic Games and he had never tested positive for a prohibited substance,” the detailed verdict stated.

“He therefore did not believe that these supplements could contain prohibited substances. He did not understand how methylhexaneamine could have been found in 2016.”

Though methylhexaneamine was not specifically named on the 2008 list of prohibited substances, it “fell within the scope of the general prohibition of stimulants having a similar chemical structure or similar biological effect as the listed stimulants,” the judging panel of three IOC members wrote.

The panel doubted if the supplements identified had caused the positive test given that Carter “used such supplements regularly and that this did not lead to other problems.”

The runner cast doubt on his own ability to avoid doping rule violations. In a written statement to the IOC, “(Carter) asserted that he did not remember having received any formal anti-doping training in his career.”

Carter can appeal the sanction to the Court of Arbitration for Sport. However, the IOC panel already anticipated one challenge in its written verdict.

“The Court of Arbitration for Sport (“CAS”) has confirmed that the presence or use of substances falling within the scope of generic definitions of the prohibited list, can be used as a basis of establishing anti-doping rules violations,” the verdict said.

In a separate ruling Wednesday, another former Olympic champion was stripped of two silver medals from the Beijing Games.

The IOC said Russian athlete Tatiana Lebedeva tested positive for the anabolic steroid turinabol in retests, and would be disqualified from her runner-up placings in the long jump and triple jump.

Next post LeBron miffed with direction of slumping Cavaliers