In Colombia, gourmet meals almost worth going to jail for 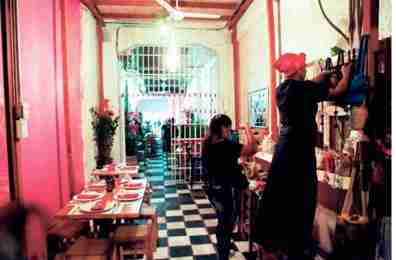 Convicts, some of them found guilty of murder, have been serving up gourmet meals since December in a novel experiment intended to promote the inmates’ rehabilitation and confront the Colombian public’s neglect of the country’s exploding prison population.

Judging by the strong turnout at the Interno restaurant on a recent night it appears to be working.

Seabass ceviche and a tabbouleh salad made of Andean quinoa are among the dishes on offer whose recipes were provided by some of Colombia’s top chefs. Dinner is served in a patio at the minimum-security prison where the inmates used to eat tasteless meals on disposable foam trays, which has been brightened up with a wall-sized mural and pink tassels hanging from metal bars.

Interno — Spanish for “inmate — is modeled on the InGalera restaurant at a penitentiary in Milan, Italy.

Latin America’s jails are some of the most lawless and inhumane in the world.

The inmates at San Diego frequently have to sleep on the floor due to overcrowding. The jail’s director, Ramiro Cuadro, said that without donations from outside groups, important rehabilitation programs wouldn’t exist.

The restaurant is an initiative by Teatro Interno, a Colombian foundation led by TV actress Johana Bahamon that holds theater workshops in prisons across the country. At San Diego, which sits just a few blocks from Cartagena’s five-star hotels, celebrity chefs like Henry Sasson and Koldo Miranda ran workshops teaching the 170 inmates how to make bread and whip up fancy desserts. About 20 saw it through to the end and now don brightly colored Caribbean head wraps to greet guests.

Luz Adriana Diaz, coordinator of the restaurant, said the hardest part was convincing the women to believe in themselves.

“Being in jail you sometime get testy or aggressive and you ask yourself, is it really worth doing something?” said Isabel Bolano, a 62-year-old woman awaiting trial for allegedly belonging to a right- wing paramilitary group. “We all have fragile hearts. Anything can break us.”

The goal of the project is to avoid recidivism, which is a major problem in the country where jails struggling with over- crowding, drug use and poor sanitary conditions are breeding grounds for criminality. Colombian authorities acknowledge that they have about 160,000 inmates locked up, though the country’s 130-plus prisons were built to house just 120,000.

Karen Paternina, a 27-year-old accused of extortion, said she hopes the skills she has learned will help her open a pastry shop so that when she gets out of jail she can provide for her baby daughter, who visits her at the prison with relatives every Sunday.

“Working with others can be difficult because we all think differently. But it’s also pretty cool to learn from them,” she said. And in a country where there is widespread fear of those in prison, a change in attitude is also apparent in the well- heeled tourists who come for dinner, sometimes posing for selfies with their inmate-waitresses.

“It’s a new experience,” said Rebeca Rodriguez, who was dining at Interno for the first time. “Those of us who are on the outside have to learn to value the people who are here inside.”

Next post CONCACAF trims Champions League from 24 teams to 16