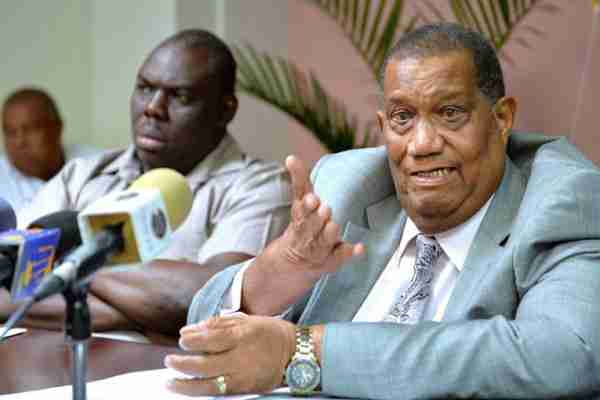 The Jamaican prime minister’s office said Clarke experienced chest pains Thursday morning while waiting for a flight at Miami International Airport. Rescuers began CPR and an ambulance rushed him to a hospital where he was pronounced dead at around noon.

Officials from both of Jamaica’s main political parties expressed sadness and shock at the news of his death. Prime Minister Portia Simpson Miller said Clarke was a rare Jamaican politician “who was loved not only by members of his party but people on the other side.”

Clarke was the island’s agriculture and fisheries minister and served as a parliamentarian since the early 1990s. A farmer for years, the seriously overweight Clarke was known as a man of big appetites who was always quick with a joke. Tourism Minister Wykeham McNeill described him as “a giant of a man with a giant personality.”

Clarke was on leave from his political duties while receiving medical treatment for a back condition in Florida.

“He can easily be described as one of the most colorful Jamaican political figures during this period of history and I am sure he will be sadly missed by many Jamaicans,” said Christopher Tufton, a former agriculture minister for the opposition Jamaica Labor Party.

He grew up on a vegetable and root crop farm in the western parish of Westmoreland and worked for nearly 30 years on Jamaican sugar estates. He owns a large farm in St. Elizabeth parish producing cane and various other crops.

The parliamentarian for central Westmoreland was agriculture minister for about a decade between the late 1990s and 2007, when the People’s National Party lost power. He was reappointed in 2012 when Simpson Miller brought her party back to power.

He said a top priority was boosting food security in Jamaica, where dependence on imported food has ballooned in recent decades.

A few years ago, Clarke was charged with dangerous driving after a fatal crash with a 25-year-old motorcyclist. Clarke was behind the wheel of an SUV. The charge against him was dismissed by a judge in January 2011.

He is survived by his wife and two children. Funeral arrangements were pending.