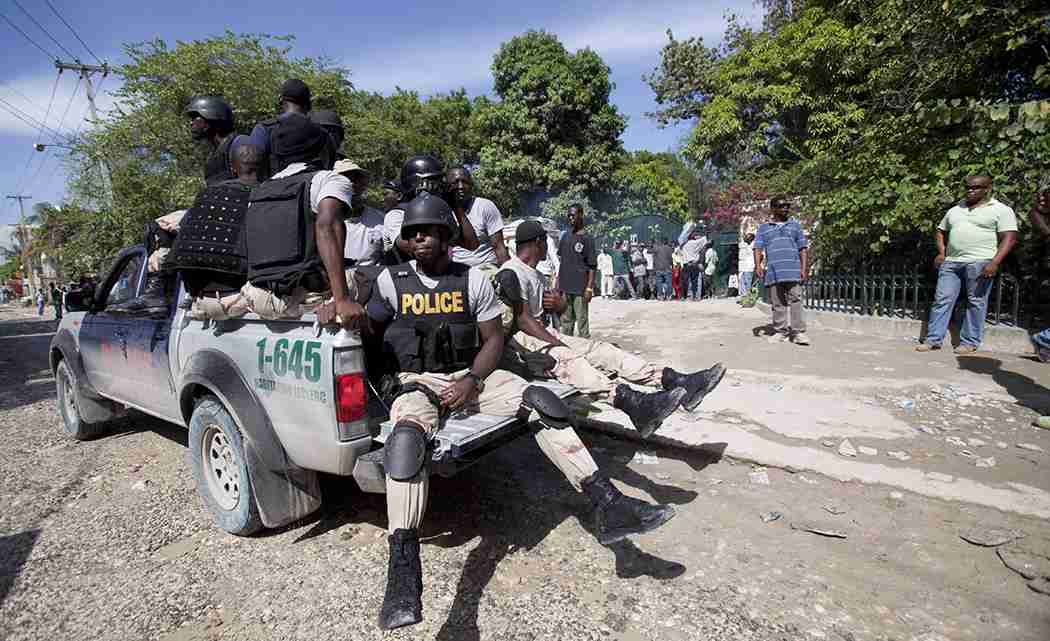 PORT-AU-PRINCE, Haiti (AP) – Former Haitian President Jean-Bertrand Aristide returned home from exile in 2011 to a jubilant welcome, but lately he has seemed more like a prisoner.

Police have been stationed outside the cement-block walls of his compound for several weeks, keeping watch and awaiting orders to carry out an arrest warrant issued by a judge investigating allegations of corruption, drug trafficking and money laundering that date back about a decade. The warrant was issued for failure to appear to testify in a closed evidence-gathering session in August.

As rumors have circulated that an arrest was imminent, supporters of the twice-elected, twice-deposed president have flocked to the compound along a busy stretch of road near downtown Port-au-Prince. A few weeks ago, they clashed with police, throwing rocks and setting up fiery barricades. Their numbers vary, with just a few at times, but some are there at all times in a tense vigil.

“President Aristide loves us, the Haitian people, so we must protect him from those who want to persecute him,” said Juste Wuilson Jean, one of a dozen men stationed outside the compound last week.

Authorities say the standoff may come to an end soon. The investigating magistrate, Lamarre Belizaire, recently summoned the police chief to court to explain why his order has not been carried out more than two months after it was issued. Police spokesman Frantz Lerebours said commanders are simply waiting for the best time to move.

“It’s up to us to judge when the opportunity is right,” Lerebours told The Associated Press. “We’ll take action when we can have the least problems possible.”

If Aristide is brought to court for questioning, Belizaire can drop the charges, allow him out on personal recognizance while investigations continue, or lock him up in jail.

“Typically in Haiti, if the judge thinks there is reason to pursue the case, the accused is put in jail, usually for months, sometimes for years without trial,” said attorney Brian Concannon, director and founder of the Institute for Justice and Democracy in Haiti. That outcome could lead to unrest for a country that has been enjoying a period of relative tranquility following years of tumult.

Although out of power for a decade, Aristide remains divisive in Haiti. He is beloved by many as a champion of the poor who led opposition to the dictator Jean-Claude Duvalier and he is reviled by some elements of the Haitian elite. Aristide became the country’s first democratically elected president in 1990, was ousted from power within a year and then returned to power with the backing of the U.S. government. He was ousted during his second term in 2004 in a violent rebellion amid accusations that he allowed corruption and orchestrated attacks on opponents.

The former priest is still popular enough that rumors of his impending arrested have prompted thousands of supporters to take to the streets of Port-au-Prince, burning tires and throwing stones or clapping their hands and singing, “Our blood is the blood of Aristide!”

Belizaire is investigating allegations of corruption, money laundering and drug trafficking dating from Aristide’s second term. But the judge has not discussed details of his investigation publicly and declined interview requests.

Maryse Narcisse, the leader of the Fanmi Lavalas party that Aristide founded, denied that the former president was flouting the law, and argued he was never properly served with the summons to come to court for questioning.

One of Aristide’s lawyers, Mario Joseph, asserts the allegations are meant to discredit Aristide, and by extension the Fanmi Lavalas party, before legislative and municipal elections. Voting was supposed to be called by the government of President Michel Martelly in 2011, but remains unscheduled due to a stalemate with six opposition senators. Presidential elections are also due next year.

But Prime Minister Laurent Lamothe dismissed those allegations as absurd, saying the judge is conducting an independent probe into a 2005 draft report from Haiti’s financial intelligence unit that first made the corruption allegations against Aristide.

“The judge is an independent judge doing an independent inquiry into a report that was drafted six years before President Martelly was in office,” Lamothe told The Associated Press.

As is typical of Haiti’s rumor mill, gossip is churning. One of the latest stories swirling through Port-au-Prince is that a special cell has already been prepared for Aristide at the dismal national penitentiary.

Salim Succar, legal counsel for the prime minister, said the rumors are “absolute gibberish.” He said the judge’s investigation of Aristide is a “matter of justice” and Belizaire is “courageously” pursuing the matter against the ex-leader whose cult of personality remains strong, perhaps dangerously so, among Haiti’s poor. He said guns have recently been fired menacingly outside the judge’s home.

Many speculate there will be bloodshed in slums if Aristide is carted off to court, but others wonder whether Aristide, out of power for a decade, is mostly a faded force.

Alex Dupuy, a Haiti expert and sociology professor at Wesleyan University in Connecticut, noted that Aristide’s political party is divided and not as powerful as it used to be.

“There could be some unrest in Port-au-Prince areas where he still has some significant following. But given the shift in the political balance of power in Haiti, I doubt very much that his arrest would generally cause significant or sustained unrest,” said Dupuy, author of a 2006 book about Aristide titled “The Prophet and Power.”

But in Bel Air, a rough warren of shacks on a hill overlooking the area where Haiti’s national palace used to be before it pancaked in the 2010 earthquake, residents say they are bracing for more trouble than usual.

“Aristide is one of the big men of Haiti,” said shoemaker Paul Francois Bonhomme as he played dominoes. “If he’s arrested, there will be people in the streets and many will get hurt.”

Next post HOW TO PICK A COLLEGE? DATA CRUNCHERS HOPE TO HELP