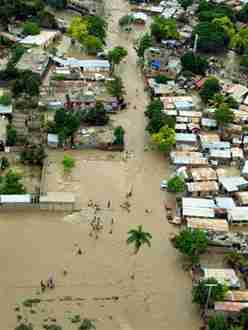 But the post-Hurricane Matthew landscape is devastation even beyond what he’s seen before in the poorest country in the Western Hemisphere.

“These were already desperate people,” Brock said Tuesday from Haiti. “Now they have nothing.”

RAM dispatched an advance medical team to the western region of Haiti, the hardest hit by the hurricane, on Oct. 10. Brock followed Oct. 16 with more volunteers and a second aircraft.

There they’ve been air-dropping high-nutrition meals, provided by Air Mobile Ministries, to starving Haitians – more than 13,000 as of Tuesday, with another 6,000 planned for Wednesday’s flights. RAM is providing volunteers, two planes and fuel – around $7 a gallon currently, Brock said. Those who wish to donate to the effort can use the Aid Our Disaster Relief Efforts button on the nonprofit’s website, or call 865-579-1530.

Besides wiping out gardens and fruit-bearing trees on which villagers relied for food, the hurricane took their shelter, and little infrastructure existed even before the storm.

“The shortage of housing on the entire island is just incredible,” Brock said. “There are over a million people living in little shacks made of cardboard and tin. When you get a Category 4 hurricane, it carries away all of that. There are thousands and thousands of people homeless.”

RAM is dropping the meals to areas directed by agencies. Board member Dick Stoops, who was supervising the air drops, said in a few instances it was difficult to find the place they were directed to drop food. In one village, in the isolated city of Jeremie, “the white flag looked like all the other trash strewn over the mountainside,” Stoops said.

The team planned to return with a Haitian pilot to pinpoint the location.

Dr. Chris Sawyer, volunteer chief medical officer for RAM, said those on the advance medical team found starving villagers and very few medical supplies as they attempted to treat broken bones, wounds and lacerations that occurred during the storm, as well as deliver babies.

RAM already had a clinic scheduled for January but plans to send a volunteer medical team in the next couple of weeks, as soon as it’s safe, Sawyer said.

But the long-range medical concern is the spread of cholera through “extremely polluted” water flooding the island, Brock said: “Some places got 20 inches of rain. . There are dead bodies in the water.”

Cholera, which causes diarrhea and is easily spread, can kill within hours if left untreated. The World Health Organization is sending a million doses of cholera vaccine – half of the world’s stockpile – but worldwide, 1.4 billion people are still at risk for cholera.

“There’s a lot of desperate need here, but the first concern is food and water and shelter,” Sawyer said.

Brock said RAM expects to be involved in ongoing relief efforts in Haiti. He said it’s likely to take years for the island country to rebuild even to the point it was before the storm.

RAM also sent a 53-foot tractor-trailer of supplies to areas of South Carolina hit hard by Hurricane Matthew, and will deploy a medical team of volunteers in about a week. To volunteer, register at volunteer.ramusa.org.

The nonprofit is best known for deploying mobile health-care clinics, providing free medical, dental and vision care in impoverished areas, but it has responded to disasters in Haiti, Greece, Nepal, the Philippines and Baton Rouge, La.