The legacy of awesome black people, John Lewis in particular 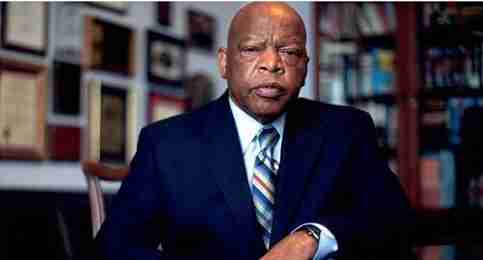 John Lewis is a living legend. A civil rights leader who marched alongside Martin Luther King in peaceful protest for civil rights, and who got his skull cracked for it. He is a simple yet dignified black man who after decades in Congress still isn’t particularly sophisticated in the traditional sense, but who commands the utmost respect of lawmakers and citizens from all walks of life.

About a week before the inauguration of President Punany Grabber, Lewis publicly declared that he would not be attending the event because he did not believe that this was a legitimate presidency. With all he has endured in the name of equality and justice, I did not know I could gain any more respect for a man like him, but just like that, he made it happen. He quietly dropped a bomb that would have had far less power, had anyone else in Congress made a similar assertion. But John Lewis said what has been on many of our minds, and made it okay for his peers to do what Republicans did when a black man entered the White House, but what Democrats typically would not do – disregard the office of the president.

Personally, I refuse to even watch the inauguration on television. Punany Grabber spent two years ensuring that most Americans wouldn’t have an iota of respect for him. Three million less votes, a title and a block party aren’t going to change that for me, nor it seems, for John Lewis.

Now, it so happened that I was in Washington, DC the weekend before the inauguration for a meeting. I looked for a protest to join afterwards, but couldn’t find one. Instead, fate and a nice lady named Nicole pointed me in the direction of the National Museum of African American History and Culture. And lo! Four massive floors of tribute to the legacy of awesome black people, designed by an amazing black architect – David Adjaye. The edifice itself was awe inspiring.

A visceral wave of pride washed over me as I progressed along the self guided tour. There were slickly designed tributes to black stalwarts in music, art, theater, dance, sports, education, politics, social justice and so on, from the US, the Caribbean and the Continent. There was a powerful and succinct history of us and the influence we’ve had on America, laid out floor by floor and niche by niche. I got lost a few times in the maze that it was, but never had a lack of new and stimulating information to absorb about how great our people are.

It almost made me forget about the tangerine terror America is about to allow to take the oath of office. And it certainly renewed in me the incontrovertible belief that while the good old boys club of white America is gasping for its last breath, the good new citizenry built on the blood spilled by John Lewis and all these other awesome black people will never be quieted again.

Next post Trump presidency must not enshrine the Age of Incivility