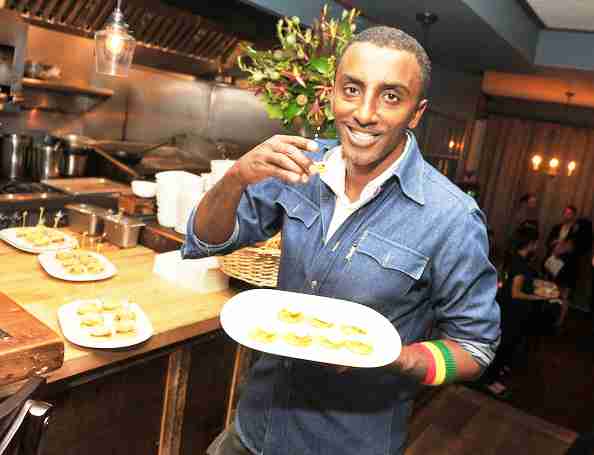 MIAMI – Miami is rebuilding a neighborhood that was once a vibrant center for black culture, and a celebrity chef is contributing what he does best: food.

Marcus Samuelsson has bought a former pool hall in Miami’s Overtown neighborhood and plans to open a restaurant there later this year.

A redevelopment board is already pouring tens of millions of dollars into Overtown, but Samuelsson is the first celebrity to make a commitment there. He bought the building for $1.5 million while turning down opportunities on South Beach.

Samuelsson’s cuisine and philosophy is a study in cultural fusion, much like the man himself. He was born in Ethiopia and raised by white adoptive parents in Sweden. He first made a name for himself with upscale Scandinavian fare at Manhattan’s chic Aquavit restaurant in the 1990s. A James Beard award winner, his celebrity grew with appearances on Food Network shows.

Then in 2010, just as Harlem started gentrifying, Samuelsson opened a restaurant there called Red Rooster. It was an immediate hit. He made an art of turning Southern soul food into hip urban fare, offered gospel brunches and organized food festivals. More recently, he opened Marcus B&P in downtown
Newark, an area that is also in the early stages of a comeback.

“There’s a linkage between Overtown and Harlem and I want to be part of that,” Samuelsson said in an interview.

His Overtown eatery will hire from the community, offer internships and feature local artists on the walls. “Through art you learn a narrative about people’s journey. Music does that, food does that, art does that,” he said.

Overtown is sandwiched between swanky downtown Miami high-rises and artsy Wynwood with its shops, bars and worldrenowned street art. Despite the prime location, though, Overtown has suffered from a lack of investment and higher-thanaverage crime rates.

In its prime, Overtown was known as a “Little Broadway” of the South. Black stars like Louis Armstrong, Nat King Cole, Sammy Davis Jr. and Billie Holiday performed at Overtown’s Lyric Theater. And even when they were performing elsewhere, they stayed in Overtown’s black-owned hotels because hotels in Miami’s white neighborhoods would not accommodate them.

In the 1960s, two expressways built through the heart of the neighborhood displaced thousands of residents, contributing to Overtown’s decline. Then in 1980, three days of riots in Overtown left 18 dead, 400 injured and $100 million in damage. The protests were sparked by the acquittal of four white police officers in the fatal beating of a black insurance salesman.

But the neighborhood is poised for a turnaround. “You are part of a renaissance that’s going to mean the most for this neighborhood,” redevelopment board Chairman Keon Hardemon told 200 people at an outdoor luncheon across the street from where Samuelsson’s restaurant will be located.

“We want this place to truly be the Harlem of the South.”
The sold-out $135-a-person preview of Samuelsson’s plans attracted politicians and the owner of an MLB franchise. Trays of fried chicken and waffles with smoked maple syrup were served with short ribs, shrimp and grits, dirty rice fritters, collard greens and cornbread with tomato jam. A strolling New Orleans-style jazz band played a festive rendition of the gospel song “I’ll Fly Away” as the crowd clapped and swayed.

Beyond the barricades surrounding the well-heeled celebration, lifelong Overtown resident Dwayne Riggins, 50, parked his bicycle and watched. His dad owned a soul food restaurant just down the street. He points out the empty lot where a pharmacy used to be. He said he likes the new high-rises being built. “Some people might not approve, but it’s time for Overtown to change. It’s been down and out all our lives,” Riggins said.

Rudy Lorenzo, who owns a convenience store, hopes the changes will attract a better-paying clientele, but warns matter-offactly that the locals “are going to get pushed out … They aren’t going to be able to afford the new apartments.”

That’s an issue that’s played out in many cities around the country – including New York – as residents who lived through years of neglect get priced out when things rebound.

Bubba Haynes has lived in Overtown for 55 years. He did construction years ago on buildings near the Lyric Theater. Now he’s retired and helps at his son’s retail store. “With growth, you take a lot of this crime out of here, but then you’re going to lose a lot of the history,” he said.

Samuelsson hopes to reflect some of that history along with contemporary local culture when he opens his restaurant. He doesn’t have a menu yet, calling that “the fun part.” His Harlem menu includes cornbread and his Swedish grandmother’s meatballs; his Newark restaurant infuses pasta with Ethiopian flavors in a dish called dorowat rigatoni.

“I’m going to come down a lot and I’m going to learn historically what was here, what’s relevant right now,” he said. “I know it’s going to be comfort food.”

Next post Democrats oppose Florida judge despite backing from Nelson