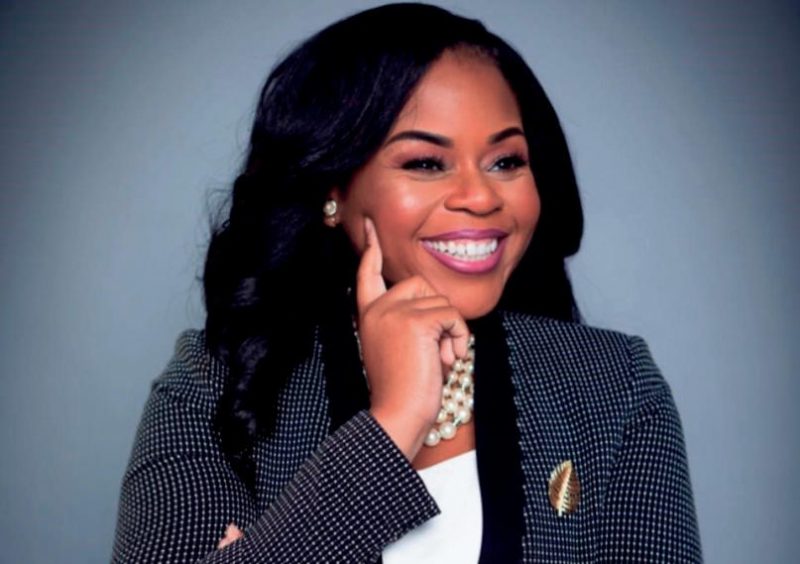 On Nov. 17, the day after her victory was certiﬁed by the state Elections Canvassing Commission, Cherﬁlus-McCormick (the ﬁrst half of her last name pronounced SHUR-full-es) headed for Washington, D.C., for three days of introductions, meetings and guidance, including a scheduled meeting with House Speaker Nancy Pelosi.

During a wide-ranging phone interview while Cherﬁlus-McCormick was in the capital, she told the South Florida Sun Sentinel about her plans to serve in Congress. She addressed the scrutiny she faced on the campaign trail, including over not ﬁling a ﬁnancial disclosure. She also analyzed the factors that led to her recent win in the Democratic primary for the Broward-Palm Beach county 20th Congressional District -something that many political insiders assumed for months was unlikely.

“When I ran, a lot of people thought it was impossible,” Cherﬁlus-McCormick said. “People were (saying), `There was no way you could make it.”’ Cherﬁlus-McCormick had run twice before. This time, in the Nov. 2 special primary election to choose a candidate for the vacancy left by the death of U.S. Rep. Alcee Hastings, she was running in an 11-candidate primary – including six current or former elected ofﬁcials, who among them had been elected to ofﬁce 26 times in Broward and Palm Beach counties.

She won the primary by ﬁve votes over Dale Holness. The Jan. 11 general election will be effectively a formality in the 20th Congressional District. It’s so Democratic that the Republican, Libertarian and no party candidates have virtually zero chance of winning.

Cherﬁlus-McCormick also is about to make some history: Upon taking ofﬁce two months from now, she’ll be the ﬁrst Haitian American Democrat elected to Congress.

Money matters in any political race, but especially in one as close as this one.

Cherﬁlus-McCormick’s campaign spending overwhelmed the other candidates, allowing her to introduce herself and her policies in TV ads far more than the others. It also allowed her to create a large ﬁeld operation with ofﬁces and staffers knocking on doors throughout the district. For comparison, her competitor Barbara Sharief put in at least $926,000 of her own money.

Cherﬁlus-McCormick is a business executive with enough money to put seven ﬁgures into her own campaign. She lent more than $3 million of her own money to the campaign. She repaid much of the initial loan, then re-loaned additional amounts for weekly advertising buys during the course of the campaign.

Reports ﬁled with the Federal Election Commission leading up to the election suggested the total in loans could be around $2 million. A ﬁnal ﬁnance report isn’t due until 2022; Cherﬁlus-McCormick said the total of her self-funding would be less.

The company she serves as CEO received $1.2 million from the federal Paycheck Protection Program in May 2020 in the early stages of the coronavirus pandemic. She said the money was quickly used to pay employee salaries.

Cherﬁlus-McCormick hasn’t ﬁled a ﬁnancial disclosure with the Clerk of the House, required once a candidate hits $5,000 – something that critics have raised.

There’s no effective way to force a candidate to ﬁle because there’s nothing the House can do to someone who isn’t yet a member. Among the top-tier candidates in the just-completed primary, three ﬁled ﬁnancial disclosures and three didn’t. Cherﬁlus-McCormick said the report would be ﬁled soon.

Cherﬁlus-McCormick addressed the heightened scrutiny from her opponents, who have poked and prodded her ﬁnances, frustrated by her ability to ﬁnance most of the campaign herself. “When it’s a Black woman who’s successful and a Black family, and we put money in, there’s always a criticizing and a hatred that comes because for some reason we’re not supposed to be successful enough to put money in our account. And it’s not just me,” Cherﬁlus-McCormick said. “It’s racist. It’s a racist comment, racist idea. The obsession with it is because you believe that a Black woman should not be able to be successful enough to do the same thing that her white counterparts have been doing.”

She said, “They wanted to make an inference that I stole it. That’s disgusting.” She is a lawyer, but some questioned why she doesn’t show up as a member of the Florida Bar. Cherﬁlus-McCormick said she’s never said she is a practicing lawyer – she’s been working as the CEO of Trinity Health Services in Miramar. Some opponents seized on that, pointing to the Trinity website, which doesn’t list her as CEO. She is, however, listed as the CEO on Dun & Bradstreet.

The company’s annual revenue is listed as more than $10.83 million, which comes mainly from home health care services covered by Medicare, Medicaid and private insurance carriers. “I have told everyone that I have been CEO of a healthcare company, and that I’m not practicing,” she said. “I never said I’ve been practicing.” Some questioned if she’s truly the Floridian she says. She’s married to a lawyer who lives in Maryland, and they have a blended family with two children. She faulted an opponent’s opposition research for following her son, age 17, with a camera. He was living in Maryland, she said, because his mother is sick.

Cherﬁlus-McCormick said people were quick to not look at the whole picture of her accomplishments and hard work. Cherﬁlus-McCormick obtained a bachelor’s degree in political science from Howard University, one of the top schools among the nation’s Historically Black Colleges and Universities.

After working toward a master’s in business administration at the University of Maryland, she earned a law degree from St. Thomas University in Miami Gardens. Her husband, her siblings and her husband’s siblings are all Howard alums.

“There was no conversation about, if you look at my background, my education, my husband – successful, an attorney _ the cases that we’ve settled. If you look at everything cumulatively, how long I’ve been working, there’s no reason to have ever had that kind of assumption.”

DRAWING SUPPORTERS During the campaign, Cherﬁlus-McCormick, 41, described herself as a “daughter of the district.” Born in New York City, she spent her pre-teen years in Brooklyn, then Queens, and moved to South Florida.

“To me it was like a different world,” she said this week. “When I came to Florida it was peace. … I grew up right there on 68th Avenue and Miramar Parkway. That’s the ﬁrst time I felt peace. And that’s the ﬁrst time where you’re in school and you can actually learn. And that’s why I always have love for the district.”

Palm Beach County Commissioner Mack Bernard, a major supporter, praised her afﬁnity for the people who live in the 20th District, which includes most of the African American and Caribbean American communities in Broward and Palm Beach counties.

“She loves the residents,” Bernard said. “She really, really worked hard at understanding the district . and the residents embraced her.”

State Sen. Shevrin Jones, whose district includes the southern end of the congressional district, said he sees a potentially top-caliber member of Congress. His assessment is “based off of her personality. Because I know who she is.” And Mitch Ceasar, former chairman of the Broward Democratic Party, said, “she genuinely wants to serve. Some people run for a paycheck. That clearly was not necessary or the motivation for her candidacy.”

Ceasar didn’t support any candidate before the primary; afterward, he joined Cherﬁlus-McCormick’s legal team during the vote recounting in the close race.

PREVIOUS CAMPAIGNS MAY HAVE PAVED SUCCESS

In the 2018 and 2020 Democratic primaries, Cherﬁlus-McCormick challenged Hastings, arguing the district needed change. Though she wasn’t successful, those campaigns gave her invaluable experience and demonstrated that she wasn’t afraid to tread where seasoned politicians – steeped in the traditions of deferentially waiting to climb the political ladder – wouldn’t venture.

It also introduced her to the district’s voters. She and a then-small group of supporters started knocking on doors in the 2018 campaign, and kept going back through this year, with a much more robust effort.

Bernard said Cherﬁlus-McCormick beneﬁted from being on the last two Democratic primary ballots, and Jones and Cesar both noted that not being a longtime elected ofﬁcial was beneﬁcial to her.

The big difference: Broward was home to four of the ﬁve current elected ofﬁcials running against her.

“In Palm Beach, it was less noisy,” she said. “We were able to get on the ground, talk to people, meet people, touch their lives with less noise because all of the other candidates were neglecting it. You’re able to be there having real conversations. I had a lot more opportunities for one-on-ones because there weren’t 11 people around me jumping over.”

Other candidates concentrated their efforts on Broward, she said, thinking “they were just going to sweep Broward and that was going to be it for them.”

Cherﬁlus-McCormick advocated multiple progressive policies during the campaign that political centrists don’t consider likely to become law, including Medicare for All and a green New Deal.

But her advocacy of a “People’s Prosperity Plan,” to give adults earning less than $75,000 a year a monthly $1,000 check, prompted disdain from the political world – and support from voters.

Claudette Calix, of Riviera Beach, voted for Cherﬁlus-McCormick and said this week she is “so proud that she won.”

“It may happen, it may not,” Calix said about the checks. “The fact is she’s trying – I give her credit for that.” Richard Giorgio, a political consultant for Barbara Sharief, who ﬁnished third in the primary, offered a harsh assessment. He said Cherﬁlus-McCormick “preyed upon some of the poorest and most desperate residents of the district, promising them she would give them a thousand-dollar-a-month income, something that will never happen. She took advantage of them, and gave them false hope.”

Cherﬁlus-McCormick said she would work toward that goal, rejecting the assertion that there would be beneﬁt to misleading voters.

“Everyone can attack my plans because I was transparent,” she said. “I stand behind my policies. I put them out there and I told everybody who I was.” Voters responded by rejecting people who’d been serving for years in other political ofﬁce, she said. “The people in the district, they understand policy, they want policy,” she said. “They just don’t want you to say, `Vote for me because I’ve been there.”’

“The ﬁrst thing we have to do is ensure that the policies, the legislation that the president is trying to pass, that gets done,” she said. “We’ve got to move Biden’s agenda.”

She’s hoping to land committee assignments that reflect the needs of the district and the proposals she touted during the campaign.

She said she views anything that can aid the economy of the 20th District as a priority.

About to become the ﬁrst Haitian American Democrat to serve in Congress, and representing a district with a large Haitian community, she’s also focused on what’s going on in the island nation, as well as policies in the U.S. that affects Haitians.

Her impromptu orientation took place during a week of intense congressional activity, as the House debated Biden’s Build Back Better legislation, which encompasses a range of social spending and efforts to combat climate change. Sometimes she’d get a call to meet someone just off the House floor, for a quick introduction and some advice. “It’s like ‘Hi, Congressperson. Welcome!” she said.

She met with members of the Florida congressional delegation, the Congressional Black Caucus and the House Progressive Caucus, and plans to join both caucuses, which she said reflect the priorities she has for the district.

She’s already getting a dose of the recognition that comes from serving in Congress. As she was leaving to fly to the capital on Tuesday, video captured by a friend shows a group of Service Employees International Union members chanting “Sheila” while some stepped up to hug her. SEIU was a strong supporter of Holness, the runner-up she’d just defeated in the primary.

Previous post Omicron variant: Another lockdown on the horizon?