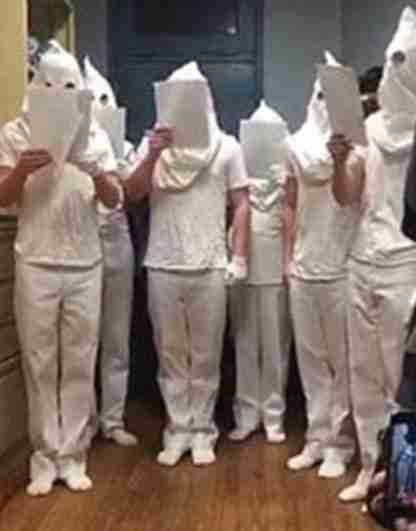 CHARLESTON, S.C. — The Citadel has completed its initial investigation into cadets appearing in photos with pillowcases on their heads similar to Ku Klux Klan garb, the South Carolina military college announced Wednesday.

Photos of cadets dressed in white pants and shirts while wearing pillowcases on their heads surfaced on social media last week. The college said an investigation indicated the cadets were taking part in a “Ghosts of Christmas Past” skit.

A statement from the college said the eight cadets involved have given statements and are temporarily suspended. Seven freshmen cadets appeared with pillowcases on their heads while an upperclassman in the picture was not dressed up.

They will return for classes next month and will face administrative hearings through the college’s military system at which they will be able to give additional statements. Then disciplinary recommendations will be made to Rosa.

The college said the process should be finished by late January or early February.

The statement also said that Dr. Lamont Melvin, a 1991 graduate who chairs The Citadel Minority Alumni Association, will assist school officials with the investigation.

Rosa said the images in the photos are not consistent with the school’s core values.

“I want people to know The Citadel is a place where everyone can flourish, meet their full potential and be treated with dignity and respect,” the statement said. “I am committed to nothing less.”

Last week, local members of Sharpton’s National Action Network called for Rosa to step down because of the incident.

Rosa said he has no intention of resigning and plans to honor his contract with the school which calls for him to serve as president until 2018.