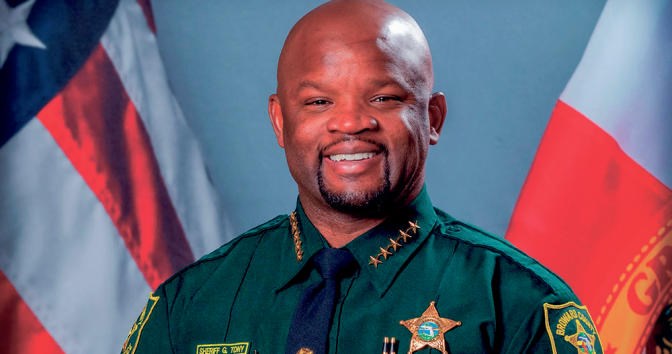 A rebellion is brewing among the 13 cities that pay tens of millions of dollars to the Broward Sheriff’s Ofﬁce (BSO) every year for police and ﬁre services.

The principal complaints: skyrocketing costs, a lack of ﬁscal transparency and accountability by Sheriff Gregory Tony’s administration and little or no input or control over the BSO personnel assigned to protect their municipalities.

At least nine mayors of BSO contract cities had agreed to meet at Cooper City’s City Hall on Wednesday to discuss what Cooper City Mayor Greg Ross, who called the meeting, says are “options” in dealing with an intransigent sheriff’s ofﬁce.

Sheriff Tony had indicated he, too, would attend. Broward’s nine county commissioners were also invited.

One small south Broward town, Pembroke Park, announced earlier this year that it was terminating its longstanding police services contract with BSO and establishing its own police department. WPLG-Channel 10 reported in May that the town expects to save $600,000 a year ﬁelding a small force of 16 sworn and two nonsworn employees. An interim police chief has been hired and the goal is to make the switch this summer, the station reported.

One issue involves nearly $8 million in “undesignated contractual services surplus dollars” that BSO collected from cities for police and ﬁre services, but were unspent and returned to the county – not the cities – last October. At the time, Tony told county budget director Norman Foster that the county commission had agreed to re-appropriate 70 percent of those funds, and related surplus funds, to BSO “for future capital needs.”

“If there was a signiﬁcant surplus last year, why are the contract cities being told that costs have increased this year?” said Cooper City Commissioner Ryan Shrouder.

Besides soldiering on with BSO or setting up a new municipal public safety department, cities have at least one other novel option on the table: doing a regional public safety deal with a larger neighbor like Hollywood or Fort Lauderdale that maintains its own local force. One former BSO city, Southwest Ranches, took such a route in 2014 when it contracted with Davie to patrol its streets and supplement the town’s volunteer ﬁre department.

In his invitation to the mayors last month, Ross wrote that he was concerned about “BSO tactics,” including the sheriff’s unwillingness “to verify their budget with the cities, and their disallowing any true ups on an annual basis.” A true up is a year-end adjustment or payment designed to reconcile the price charged by BSO with the actual cost.

“Uniﬁed we have better leverage in negotiating with BSO. Alternatively, we can discuss other options,” Ross wrote in his June 17 email.

“So it would be over $26 million next year. We think that’s not sustainable,” Ross said.

Tony received a copy of Ross’s email the day it was sent and promptly responded: “In short, the commentary/allegation disseminate is not even remotely close to having merit. My ofﬁce continues to provide direct unﬁltered transparency to all our city ofﬁcials who would make an inquiry into their contractual terms and agreements. Unfortunately, transparency doesn’t always yield the answer one may seek but the answers we provide are vetted, analyzed and based upon one core modality – truth … We don’t utilize ‘tactics’ or forms of manipulation when presenting our services to our city partners.”

Deerﬁeld Beach, however, also is skeptical of BSO’s answers. Last month the city commission began considering whether to create an Ofﬁce of Public Safety. The duties of the ofﬁce’s director would include keeping watch on significant police and ﬁre costs. A ﬁnal vote on whether to fund the new ofﬁce will come in August or September.

“Public safety is over 60 percent of our budget and there’s no real oversight,” Commissioner Todd Drosky said at the meeting. “We’re paying a lot of expenses at the word of downtown. It’s like trust me, you’re getting a good deal on this, but nobody is verifying that.”

Pompano Beach Mayor Rex Hardin said he also would attend the meeting, but not because he’s unhappy with BSO’s police services. “We pay a pretty penny, of course, but they do a good job for us,” Hardin said. “The reason I’ll be attending is just to hear what’s going on … An investigative mission to hear what Mayor Ross has to say.”

Cooper City merged its police and ﬁre services with the sheriff’s ofﬁce in 2004 when Ken Jenne was sheriff. BSO expanded signiﬁcantly under Jenne, who inked contracts with a number of

At a meeting late last month, the Cooper City Commission voted 4-1 to have City Manager Joseph Napoli look for alternatives to staying with BSO. (The city today operates under a three-year contract that expires in 2023, but has an opt-out clause with six months’ notice.) Napoli will prepare an interim report by next month, with a final report due in late September.

The agenda item for that June 22 meeting stated that the city’s “operational and ﬁnancial control over our public safety services continues to erode. Recent actions by BSO have demonstrated that the City has no input, oversight or control over our public safety operations or ﬁnances. After re-signing a contract [last year] that already shifted millions of dollars worth of costs from BSO to the City, BSO is again demanding an increase in payment more than the contractual rate and has failed to provide the required documentation to justify the increase.”

“BSO unilaterally transfers employees in and out of the City without regard for the impact on the community and BSO floats personnel into the City who are not geographically familiar with the area resulting in delayed response times. Furthermore, BSO has blatantly rebuffed the Mayor’s demands to replace unsafe ﬁre equipment that does not meet national standards,” the item says.