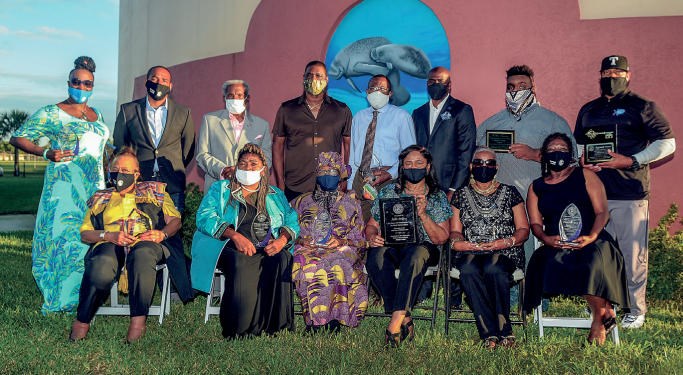 RIVIERA BEACH, Fla. – Riviera Beach Mayor Ronnie Felder knew exactly how and where he wanted to celebrate Black History Month. His vision was to honor individuals who have impacted this predominantly Black waterfront city in a major way, and to salute them outdoors onsite at the city’s huge water tank. That is correct: the water tank.

On Feb. 26 he did just that. Fourteen individuals were awarded for their tremendous talent and achievement that have had groundbreaking impact on Riviera Beach, a city often featured negatively in the media. Steve White, a lifelong resident, educator, mentor, and entrepreneur, was honored for having the only Black publishing company in the city of just over 33,000 residents. White pointed out the misgivings the city receives in the press. “Our city, unfortunately, often times, we receive a lot of negative publicity, but there are so many positive things going on in the city that I think the mayor took it upon himself to recognize those who have made positive contributions.”

While the event was historic and the ﬁrst of its kind, Felder announced another historical undertaking. The huge water tank will soon become home to a Black History Mural that will feature history makers such as Kamala Harris, Barack Obama, as well as actor Chadwick Boseman. The mural will also feature quotes of Black history makers. The unique vision was birth in the heart and soul of the mayor. “I know you all were wondering why we’re here at the water tank in the sun! But this is the reason.” He showed a rendering of the project which is set to kick off immediately.

But the day was ﬁlled with other pleasant surprises. Famed radio an nouncer and personality Reggie Dee of X102.3FM, received the Key to the City for his community activism. Felder said the popular DJ has never turned him down when asked to be there for the city, particularly the youth. Through tears, he accepted the Key, humbled and reflecting on his late mother’s dying words for him to make a difference and do something honorable and historical. His walks across America to End Racism and to promote unity were historic.

Freeman is the city’s ﬁrst ever Black male library director, who says it is not his ﬁrst time holding that distinction but is the ﬁrst time he has been recognized for it. He felt honored. Likewise, Rolle is the city’s ﬁrst Black male to start a foundation in honor of single mothers. The Mary Lee Taylor Foundation for Single Mothers was started in honor of his mother, Mary Taylor Rolle Toney, who accepted the award at the ceremony. Rolle was surprised to learn of his place in history. He said he was grateful and humbled.

The icing on the cake was the surprise appearance of recent American Idol sensation Willie Spence who was raised in Riviera Beach but moved with his family to Georgia while in grade school. Spence recently wowed all three judges on the iconic television show, garnering a standing ovation from all of them. Mayor Felder said it was an honor to present Spence an award for his show stopping feat on American Idol. As he accepted his award, the excited audience insisted he sing, and he of course gave a taste and did not disappoint.

The ﬁrst-ever ceremony was captured on all three local newscasts and was throughout social media.