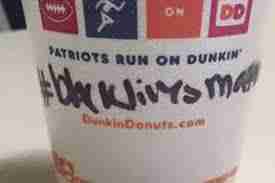 PROVIDENCE, R.I. (AP) – The Providence police union is speaking out after an officer received a cup of coffee with “blacklivesmatter” written on it.

The Fraternal Order of Police says the incident is “unacceptable and discouraging.”

The officer told the union that he received a cup of coffee Friday at a Dunkin’ Donuts store with the slogan written on the cup. He says an employee was rude to him.

The slogan arose last year during protests nationwide over police violence against civilians.

The union says it believes that “all lives matter.”

A spokeswoman for Dunkin’ Brands Group says the franchise owner apologized to the officer and counseled the employee about her behavior.