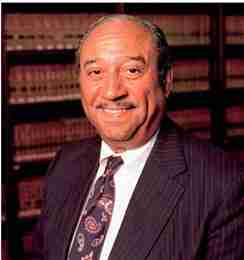 Judge Edward Rodgers was an icon, a maverick, a trailblazer. The esteemed, barrier-breaking judge passed away on Oct. 20 at the age of 91.

Rodgers, of Riviera Beach, blazed a trail for the area’s African-American jurists, becoming the county’s first black prosecutor, its first black judge and its first black chief judge. He was an icon among legal scholars and was a mentor to hundreds of lawyers both young and old. Rogers transcended legal barriers and was known as a community-wide leader.

After retiring in 1995, he spent another two decades as a community leader and a chief tender of the area’s political conscience, serving in various public roles In addition to serving on Riviera Beach’s city council and as the first chairman of the county’s ethics commission, Rodgers founded the county’s first drug court program in Riviera Beach. The Riviera Beach Post Office was named after him.

Rodgers was born in Pittsburgh in 1927, serving as a medical specialist in the U.S. Navy before attending Howard University in Washington, D.C. It was there he met his wife, Gwendolyn Baker, who went on to co-found the Charmettes, Inc. national organization. After graduation from Howard, he followed her home in 1950 to deeply segregated West Palm Beach. When he arrived in South Florida, blacks were prohibited from eating in West Palm Beach restaurants, entering changing rooms in downtown department stores and barred from using city pools or golf courses.

Rodgers briefly sold insurance, then spent several years as a vocational teacher and guidance counselor at the newly opened all black Roosevelt High School, the school attended by most blacks in segregated West Palm Beach. But it is said he scoffed at getting lower wages than white teachers, and according to reports, his longtime friend, U.S. Rep. Alcee Hastings, said he marched into a county school board meeting to protest unequal salaries among teachers. And that was said to be the beginning of his desire to study law.

According to the Palm Beach County Historical Society, Rodgers applied to and was accepted in the University of Miami’s law school – until the university learned he was black and rescinded the offer. Instead, in 1960, he left teaching to study at Florida A&M University law school, the only one in Florida that would accept black students. One of his roommates during his studies was Hastings.

As a young lawyer in 1967, Rodgers pushed to desegregate the Children’s Home Society. The following year he took on the West Palm Beach Police

Department, representing black officers in discrimination complaints. He also led a campaign to desegregate Good Samaritan Hospital. He became the county’s first black prosecutor and, in 1973, its first black judge after being appointed by Gov. Reubin Askew. He served on the bench for 22 years until mandatory retirement rules forced him to reluctantly step down.

Today, many black lawyers revere him. Attorney Jason McIntosh, president of the F. Malcolm Cunningham Bar Association, the black law association in Palm Beach County, said Rodgers was a mentor to both their new, young lawyers as well as the seasoned lawyers. “We are deeply saddened by the loss of Judge Rodgers, who was an icon, a trailblazer and a pillar in our law community and the community at large,” said McIntosh. “He was devoted to justice and we’ll never, ever forget his legacy. He embodied our theme of using your life and profession to effect change. He did that for over 60 years.”

Attorney Jean Marie Middleton, co-chair, of the Palm Beach County Bar Association’s Committee for Diversity and Inclusion, said she was just as impressed by his humility, as she was by his dedication to social justice. “He was obviously a pioneer and a legend He used his wisdom and his experience to have a personal impact on our minority law students through our Diversity Internship Program. He initiated the scholarship, but he didn’t want it named after him. That’s how humble he was,” recalled Middleton. “We do, however, give out an award yearly in his honor saluting diversity.”

Patrick Franklin, president and CEO of the Urban League of Palm Beach County, said the judge was a man of the ages. “He was one of a kind —a man of all times. He was quite wellversed on a wide range of topics,” said Franklin. “He spoke up for those without a voice and the downtrodden. And he never stopped.

I saw him two weeks ago and he was still asking questions. He was always available for counsel, always willing to participate in fostering justice. He will be deeply missed.”

Current gubernatorial candidate and Tallahassee Mayor Andrew Gillum, issued a statement. “Not only did Judge Rodgers break several glass ceilings and exemplify black excellence, but he touched lives in the communities that he served,”

After retiring from the legal world, Rodgers was a prominent member of the St. Patrick’s Episcopal Church in West Palm Beach, a member of various governing boards and a prominent voice on local issues. “He challenged me about the role of the church and our involvement in the community. He really was a wonderful coach,” the Rev. Canon Winston Joseph, St. Patrick’s rector told the Palm Beach Post. “He would always lift the level of the conversation.”

In 2003, Hastings sponsored a bill to place Rodger’s name on a U.S. post office on Blue Heron Boulevard in Riviera Beach.

President George W. Bush signed the bill, and the post office was rededicated in 2004.

Rodgers made headlines three years ago with criticisms of State Attorney Dave Aronberg for refusing to appoint a special prosecutor to investigate the death of Corey Jones, who was shot dead along a highway exit ramp by a Palm Beach Gardens police officer. The officer later was charged with manslaughter and attempted first-degree murder with a firearm and awaits trial.

According to reports, after President Barack Obama was elected, Rodgers reportedly said in an interview, “I look forward to the day when we stop noticing when a black person is the first black in whatever appointment or profession,” he said. “I hope we’ll stop hearing the punctuation: ‘The first black to …’”