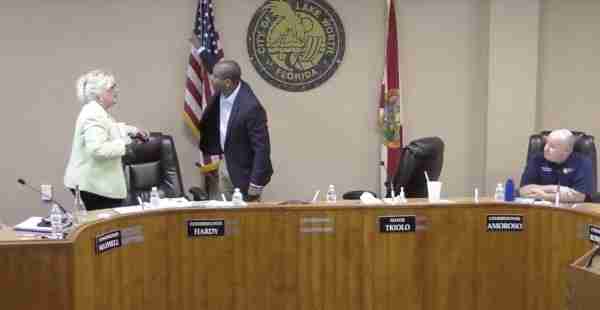 With the coronavirus pandemic only starting to explode in Florida, Lake Worth Beach ofﬁcials expressed little concern that City Manager Michael Bornstein was shutting off power to more than 100 city utilities customers with past-due accounts.

By the time the city announced a moratorium, last week, and the disconnects were being restored, the commission meeting for Thursday, March 19, oncecanceled, had been rescheduled. On the agenda: a resolution to “reafﬁrm” Mayor Pam Triolo’s authority to grant emergency powers to the manager.

On the night the NBA canceled their season, Hardy said the other day, he wrote requesting an emergency meeting, for Friday, March 13, of the ﬁve-person commission, to address the response for residents and employees if COVID-19 mushroomed in the city.

“There were policy matters, that I felt the commission needed to discuss,” Hardy said Tuesday. “There were speciﬁc things the city manager was not going to do, unless the city commission directed him to do these things.

“I tried to get out in front early, on March 12,” said Hardy, “with my email to the city manager, to say we need to get the policymakers together to give you direction on at least three crucial things.”

Hardy’s initiative was “short-circuited” by Bornstein, who added in comments to The Palm Beach Post that he appreciated the 30-year-old commissioner’s “youthful exuberance,” but that Hardy should “calm down.”

At the meeting Thursday, however,

Hardy not only wondered why commissioners would simply cede authority to Bornstein without oversight. Hardy also questioned why the mayor had let Bornstein disconnect people’s power “during a global health pandemic.”

One result: By now, the whole world is watching the 38,000-resident, sevensquare-mile town, just south of West Palm Beach and 64 miles north of Miami, whose ﬁrst settlers reportedly were Samuel and Fannie James, a formerly enslaved African American couple.

At last count, nearly more than 4 million people had viewed video of the March 19 meeting from the town that only recently changed its moniker to get “Beach” in its name. The consensus: Hardy, passionate and caring; Triolo, heartless and callous. The nearly 38,000 change.org petition signatures, demanding that Triolo step down, also reflect the comments on the video, including some Triolo death threats, which Hardy has condemned.

The contentiousness brewing for weeks escalated as Thursday’s meeting began. Triolo announced a ﬁve-minute limit on discussion of the resolution; Hardy deemed that inadequate for “perhaps the most important meeting this body has ever had.” Triolo accused Hardy of conducting a “dog-and-pony show,” Bornstein characterized it as “a college-level debate.”

At one point Bornstein said past-due utilities had not been turned off prior to the moratorium, before acknowledging that 50 customers’ power had been disconnected before the city’s statement that shut-offs would stop. “Like, seriously?” Hardy challenged Triolo. “Like you’re letting this guy stand here and lie to the public?”

When Triolo cut off discussion, Hardy said he was being denied his allotted time and questioned: “Are you telling me that you’re going to keep me from talking right now?” With Triolo trying to recess the meeting, Hardy said: “You call me disrespectful because I’ve interrupted people. But (Bornstein) has turned off people’s lights in the middle of a global health pandemic. That’s what that gentleman did. And you think I’m disrespectful.”

Triolo is not the ﬁrst elected ofﬁcial to take heat for a city’s manager. Other statements from the viral video suggested more than the typical tug-andpull between manager and board. Triolo’s “Hardy for state house” comment, among others, Hardy said, seemed to reference his plans to leave the commission in November to run for a seat in the Florida State House.

Hardy said this week that it was hard to accept what he considered the city manager lying about shutting off people’s utilities at such a crucial time; that he had gone into the meeting prepared to accept being outvoted, but not prepared to be denied the right to speak.